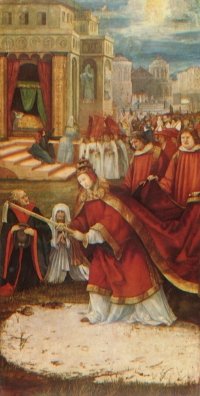 Pope Liberius uses a hoe because it’s hard to find a shovel in Rome in August.

Anybody else getting bogged down by the barrage of bad news that seems to hit every time you check the headlines? For a committed Catholic, there seem to be so many storm clouds on the horizon. And yet, hope is the constant message of our Holy Fathers.

Either the Roman heat got to them or the Successors of St. Peter have been seeing things that don’t make the headlines.

Summers in Rome are harsh. August is so harsh the place is pretty much a ghost town. “Ferragosto,” they call it, ever since the Emperor Augustus extended the holidays (or feriæ) back in 18BC.  The Seven Hills of Rome are not mountains, and certainly nowhere near tall enough to have summer snows. Which made it all the more miraculous when snow fell on the Esquiline Hill one August 5th back in the 50’s. The 350’s.

The night before, Our Lord had worked both ends of the transaction by granting visions to a childless Roman patrician couple, whom He told to pay for a church to be built (they had already vowed to bequeath their possessions  in honor of the Virgin Mary), and to the Pope, whom He told to have a church built. The sign was unmistakeable. Snow in Rome. In August. That just doesn’t happen.

That miracle wasn’t enough, though, for the Pope, Liberius, to be considered a saint. When you see the list of popes, he is number 36, the first without “St.” before his name, and the only non-saint in the first forty-nine pontiffs. But he did do some penance, since he had to shovel snow in August. In the hilltop snow, Pope Liberius trudged out the outline of the church.

As the centuries wore on, the church of Our Lady of the Snows (congratulate any women you know named Nieves –snows– today!) eventually became the Basilica of St. Mary Major, the most important church dedicated to Our Lady in all Christendom. There you can find an icon attributed to St. Luke, a relic of the manger of Bethlehem, the final resting place of St. Jerome, the altar where St. Ignatius (and Pope Pius XII) said his first mass, a ceiling gilt with the first gold sent back from the New World. Not to mention the pew where Pope Francis knelt on the first morning of his pontificate.

It’s churches like that which yank me out of my worldly stupor and point to the fact that miracles do happen, that God is in charge, that his Mother’s prayers are powerful, that the Church has weathered worse than what her enemies of today and her enemies of forever can throw at her. Today in St. Mary Major lily petals will snow down from the rafters like they do every year, no matter how bad the political or economic news is outside.

In his words before praying the Angelus on Sunday, Pope Francis spoke of the young people from all over the world he encountered in Rio:

“Young people are particularly sensible to the void of meaning and of values that oftens surrounds them. And unfortunately they often pay the price for it. Instead, the encounter with the living Christ, in his great family which is the Church, fills the heart with joy, because it fills it with true life, of deep goodness, which does not pass away nor wilt. We saw it on the faces of the young people in Rio.”

No, the heat in Rome isn’t getting to Pope Francis. (He hasn’t even left Rome for Castel Gandolfo like most recent popes have done.) He reads the same headlines I do, but gives me the example of seeing through eyes of faith. The world wastes away around us, and the truth of Christ remains. I need to rely on the faith of those around me to pray for faith. In the midst of all the storm clouds, one of them carries snow in August.