“So What If Abortion Ends a Life?” 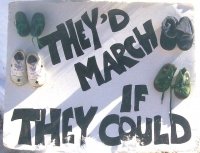 Hoopeses have carried this sign to Washington and Topeka for more than a decade.

“So What If Abortion Ends Life?”

That’s the shocking headline of a Salon magazine piece by Mary Elizabeth Williams.

Her argument is that more powerful human beings should be allowed to destroy weaker ones. But that’s not how she frames it.

The opening of the piece gives a good sense of her approach.

“Of all the diabolically clever moves the anti-choice lobby has ever pulled, surely one of the greatest has been its consistent co-opting of the word ‘life.’ Life! Who wants to argue with that? Who wants be on the side of … not-life?”

This demonstrates her method throughout the piece:

1. She belittles opponents with name-calling. In this case she calls us Satanic in our cleverness. She invents an “anti-choice” lobby that we are a part of, because it’s important for her to imagine us sitting around cackling and scheming ways to reduce women’s choices. (She should learn to walk in our shoes instead of labeling us so divisively.)

2. She feigns honesty while dancing around the issue. You can see it right there in the opening. “Who wants to be on the side of … not life?” she asks because in all of her honesty about unborn human life she can’t bring herself to say that she is for the death of unborn human life. She is simply for … not life. She is refreshingly honest … until she can’t bear the consequences of her position.

To her credit she does not deny that human life is human life. “I know that throughout my own pregnancies, I never wavered for a moment in the belief that I was carrying a human life inside of me.”

Not to her credit, she also refuses to call killing anything but “choice.” “I believe that’s what a fetus is: a human life. And that doesn’t make me one iota less solidly pro-choice,” she says.

But however you slice it, her argument is that the more powerful get to destroy the weak, and that’s just how it is.

“Here’s the complicated reality in which we live: All life is not equal. That’s a difficult thing for liberals like me to talk about, lest we wind up looking like death-panel-loving, kill-your-grandma-and-your-precious-baby storm troopers. Yet a fetus can be a human life without having the same rights as the woman in whose body it resides. She’s the boss. Her life and what is right for her circumstances and her health should automatically trump the rights of the non-autonomous entity inside of her. Always.”

There is nothing more chilling than the argument that “the boss” gets to trump the weak because, well, because she is more powerful. Talk about diabolical. After a century of fighting for the weak and disenfranchised, the Left has become a movement that sees “the boss wants it” as the ultimate argument for killing a human life.

But don’t trust what I say. Because I say the right to life counts as much for the weak as the powerful, Williams calls me a “wingnut.” I’m an “archconservative.” People like me just want to “browbeat [women] with the concept of ‘life,’ using their scare tactics on women and pushing for indefensible violations like forced ultrasounds.”

In other words, we want to inform women about the human life Williams acknowledges before they choose to kill it. How wing-nutty of us.