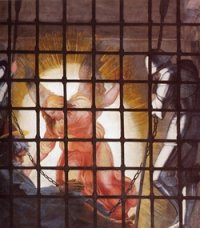 The Pope is going to prison next week, as a ceremonial foot-washer, what does that mean for you?

Pope Francis has announced he will not celebrate the Holy Thursday Mass in St. Peter’s Basilica. Continuing a tradition he began in Buenos Aires, he will celebrate the mass, which includes the commandment of love and the washing of the feet, in a prison. The Roman juvenile prison “Casal del Marmo” will witness his His Holiness’ Holy Thursday liturgy.

After the Holy Thursday “Chrism Mass” in the morning, which unites the priests in a diocese around their bishop, the Holy Thursday liturgy “Missa In Cena Domini” (“The Mass of the Lord’s Supper”) has traditionally been a celebration of the institution of the Eucharist, and Christ’s commandment of love. (The Latin word for commandment, mandatum, gives rise to the old name for this day, “Maundy Thursday.”)

Pope Francis is taking this celebration outside the walls of the Vatican, and inside the walls of a prison. It is a gesture deep in significance, and continues the themes of humility, mercy, and far-reaching pastoral care that are emerging as hallmarks of this pontificate.

St. Francis of Assisi’s simplicity and tenderness attracted followers by the power of his example, and without many words. I have an inkling that Pope Francis’ example will also attract attention, and we should all take notice and apply it to our lives.

How do I reach out to those around me who are behind walls, be they walls of sadness or solitude, sickness or starvation? I admit I often expect my tax dollars to handle those situations, but Pope Francis’ actions challenge me.

How different am I from Ebenezer Scrooge who expected the government to handle things, and secretly wished for such social eyesores to go away “to decrease the surplus population”?

The focus of Catholic identity has often been seen as a matter of doctrinal fidelity: do you teach what the Church officially teaches? This, of course, is not a bad thing. The truth is important, for Christ Himself is the Truth. But He is also the Way.

Pope Francis is saying, with the booming silence of Franciscan example, that Catholic identity is also measured by service and outreach to the least of our brothers.  It is a challenge to the clergy but no less to the laity, as I pointed out.  Do I give until it hurts? Do I reach out and touch the wounds of the world where I live, extending Christ’s hands to touch those around me?

So many in the Church do, and the Church has done so like no other institution in history. But we are all called to do more.

God sent his Angel to free St. Peter when he was in chains for the sake of the Gospel. For the sake of that same Gospel, God has sent another angel to bring comfort and mercy to those in chains. We are in chains in so many ways, each and every one of us, but we are also called to be God’s messengers, his angels of mercy.