Students Learn ‘How to Be a Catholic and Ethical Practitioner’ 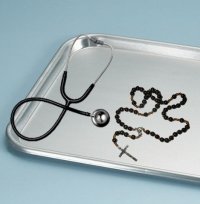 On April 10, 2013, the Benedictine College Student Nurse Association featured a panel of medical practitioners and ethics scholars who discussed “How to be a Catholic and Ethical Practitioner.” It was part of the college’s continuing efforts to promote Catholic identity in public life.

The panel consisted of five speakers:  Father Justin Dean, OSB; Phyllis Lieb, MSN, RN; Jackie Harris, MSN, APRN; John Rziha, Ph.D.; and Dr. Gerard Brungardt, MD.  The five speakers addressed student questions based on how to live according to Catholic teachings and yet still work in the medical field.  The discussion included issues like the anointing of the sick, abortion, embryonic adoption, and assisted suicide.

Fr. Justin first spoke on anointing of the sick. He explained that the practice is used to heal both the soul and the body.  Lieb spoke on abortion, birth control, and her personal experience working in the delivery room just two years after Roe v. Wade had been put into practice.

“Abortion is the ugliest, most evil thing you can be involved with,” she said.

She went on to explain that birth control, like “The Pill,” can cause strokes, heart attacks and blood clots in users.  Birth control pills “literally ruin your body,” she said. She advised the nursing students in the audience to recommend Natural Family Planning to patients because it is easy and does not harm the woman’s body or potentially cause an abortion.

Dr. Brungardt explained that committed Catholics respect life and love the dignity of a human person.  However, he explained, “people around you will not share the same values.”

“One always meets another person at the same level one seeks to know them,” he said. He told the nursing students to strive to find out the patient’s greatest needs and concerns.

“Get into the patient’s heart,” he said.  “A request to hasten death is a cry for help.”

Rziha, an associate professor of theology at Benedictine College who teaches a course on Christian bioethics, addressed the theme of being an ethical practitioner in an unethical world. He explained that as Catholics we believe in a very logical and rational position.

“God is intelligent and good,” he said.  “And every creature is going to be fulfilled when doing what it’s supposed to do.”

Harris concluded the event with her personal testimony to the students about finding a job in the medical field.  Before starting any job in the field, she made it very clear she would not participate in any form of abortion or birth control.  Now a successful nurse practitioner, her bravery and courage inspired the students of Benedictine College.

All five speakers addressed the value of human life and the importance nurses, doctors, and others who work in the medical field have on the rest of our lives today.

“Really, we do make a difference,” Harris said.

Benedictine College opened its nursing program at its Atchison, Kan., campus  in the Mother Teresa Center of Nursing and Health Education on the 100th anniversary of the birth of Mother Teresa. The Benedictine College Nursing Program offers a 4-year Bachelor of Nursing (BSN) degree. The program has received Kansas State Board Approval and upon graduation, students are eligible to apply to take the registered nurse licensure examination (NCLEX-RN). The baccalaureate program at Benedictine College is accredited by the Commission on Collegiate Nursing Education in Washington, D.C.