The Fruit of Jesuit Education 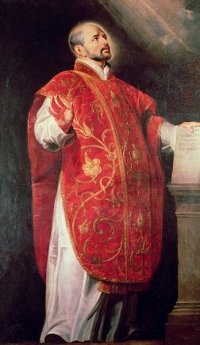 It has become commonplace in some circles to bash the Jesuits. When one bows to trample rotten apples underfoot in an orchard, one always runs the risk of missing good fruit still on the tree.

Today, on the Feast of Saint Ignatius of Loyola, there are many Jesuit stories to be found. There is the story of Fr. Bert Thelen, SJ , who announced his renunciation of the priesthood after 45 years as a Jesuit.  There is a NY Times story about how Georgetown has become a gay friendly campus. The Times thinks this is great, which is why Pope Francis’ remarks on his plane ride back from Rio have been so taken out of context.

But, lest we become discouraged and say “there go the Jesuits again,” let’s not forget that Jesuit education, embattled as it is, misdirected as it has undeniably become in many places, is not without fruits for the Church. R. R. Reno, First Things editor and author of the article on Fr. Thelen, was brought into the Church by him.

Today, Bishop Frank Caggiano, Auxiliar of the Brooklyn Diocese, was named Bishop of Bridgeport, CT. A native of Brooklyn, Bishop Caggiano attended Regis High School in Manhattan, and later attended the Pontifical Gregorian University in Rome. You don’t get a more Jesuit education than that. (Those who know me are already smiling, because I attended both of those institutions. Yes, this is personal.)

But the big Jesuit story on this feast day is the Mass celebrated by Pope Francis at the Church of Saint Ignatius in Rome, commonly called the Chiesa del Gesù. The name is important. It´s about Jesus, not about Saint Ignatius. The Pope’s homily brought home that message beautifully, by exhorting his brothers from within their spirituality, a spirituality that is at the core of his life.

His three points (Jesuit homiletics 101) were:  put Christ and the Church in the center;  let yourself be conquered by Him in order to serve; and feel the shame of our limits and sins, in order to be humble before Him and ones brothers.  In each and every point, His Holiness cites Scripture and Saint Ignatius’ Spiritual Exercises.

The homily is a masterpiece. It gives any Jesuit, and anyone educated by them, a deep feeling of gratitude for being part of the gift to the Church that is Jesuit spirituality and education. And it calls us all to put Christ in the center and to purge ourselves of selfishness, which gets in the way of the mission. (And that can be said of every charism, not only the Jesuits.) He reminds them that the symbol of the Jesuits is Jesus’ name. It is simple and profound. When Jesus doesn’t come first, one is outside the Jesuit charism.

Pope Francis draws on Saint Ignatius’ particular Spanish: “But He is always first. In Spanish there is a very graphic word, which explains this well: He primerea-s us, ‘El nos primerea.’ He’s always first. When we arrive, He’s there already and is waiting for us.”

Pope Francis is a fruit of Jesuit education and formation. He is a one man argument that the Jesuits still have much to give the Church. A few rotten apples will inevitably spoil the barrel. That is not true of a barrel of Jesuits. There are plenty of good apples left, and the tree of the Spiritual Exercises is still drawing life from Christ from its roots deep under a humble cave in Manresa.