The Gift Half Understood 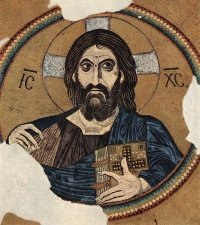 You get the impression that St. John, writing years after Christ’s ascension, was still blown away. At four in the afternoon one day, when he was about eighteen years old, he and his buddy Andrew, sort of a holy roller –unlike his brother, soon to be called Peter-, had seen John the Baptist point out a guy walking by and say “Behold, the Lamb of God.” Now,  any Israelite would have been floored.

You mean, the Lamb? The perfect sacrifice? What Scripture has been longing for and hinting at ever since a ram replaced the lamb for the sacrifice when Abraham’s hand was stayed from offering up his own son Isaac? Yeah. And he’s that guy over there.

And years later, John is still shaking his head and in awe of how God himself could become man, pitch his tent among us, and be seen and heard.  There was nothing in that passerby that said that He was God. Without John the Baptist’s words, Andrew and he may not have even noticed him.

The Catholic Faith is full of these moments. Of apparent bread that is God himself. Of absolution through a weak human voice that carries God’s own forgiveness. Of the laying on of human, sinful hands that communicate divine power. Of the vows of two weak human beings who can sign a blank check of “‘til death do us part.”

And it doesn’t end with the sacraments. Scripture itself is a miracle of God’s message in human words. Scripture has no errors, and yet it can have bad grammar. St. Mark spoke Greek about as well as your average Swedish fisherman speaks English, and yet managed to bang out a Gospel.

The best preschool teachers get down on their students’ level to teach them, and give directions staring straight into their eyes.

God himself, infinite and mighty, asked for a space in our sandbox to teach us how to share the Tonka trucks. And why?  So that we could have fellowship with Him.

It is something unique in religious history, which chronicles so many efforts of man to reach so many visions of so many gods. The Judeo-Christian tradition is based on God who comes to us. As T.S. Eliot says in his amazing Four Quartets:  “The hint half guessed, the gift half understood, is Incarnation.”

The papacy is another example of this. There is nothing in a man that makes him worthy of the papacy. (The same is true of the priesthood in general.)  Yet we Catholics believe that the College of Cardinals’ choice is God’s choice.  God’s choice becomes incarnate, so to speak, in the votes of two-thirds plus one of the guys in funny red hats. That’s nuts.

But no less nuts than bread that becomes God, or sins being forgiven through someone who may be a bigger sinner than the penitent in front of him, or a Jewish fundamentalist rabid persecutor of Christians writing the lion’s share of books of the New Testament.  It’s nuts in that it beggars the imagination. But at least it’s consistent.

More than a few journalists, talking heads and modern-day academics will have a lot to say in high-falutin words these days about the upcoming conclave. I’ll save you the time. They’re gonna say it’s nuts.

And I’m not saying I know better, by my own weak powers of reason. But as a person of Faith, I know God is at work in this process. And by my reason (faith seeking understanding) I can say I believe it makes a lot of sense. Seems to me that God has been acting through human beings a lot throughout the history of salvation.

At every mass, the priest pours a drop of water into the wine and prays, “By the mystery of this water and wine may we come to share in the divinity of Christ, who humbled himself to share in our humanity.”

“God became man,” St. Augustine said, “so that man could become God.”  And even though our humanity is a drop compared to the ocean of divinity, sharing in God’s life through grace is the purpose of it all. To share in this forever is the goal of our striving.

God knows we need someone to help guide us there.

One hundred and seventeen fallible old men (maybe less if the conclave starts later) will soon gather and choose who the next infallible Vicar of Christ on earth will be.

You mean the Vicar of Christ, basically Christ’s Prime Minister, like the one who, in David’s day, held the keys of the kingdom when the king was away? You mean one who is a focus of unity and yet of the world’s hatred, who speaks on faith and morals with the authority of Christ Himself?

Yeah.  And he’s that guy up on the loggia.