The God of Hide-and-Seek 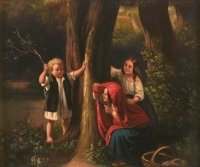 There are few things as entertaining as playing hide-and-seek with a two year old. They love hiding. They invariably pick the same fairly obvious places over and over again, and they are always surprised to be found.

When my youngest was two, I could sense his little heart beating a mile a minute as I approached the pantry door, even though Patrick had hid there five times in a row. His wide-eyed surprise and uncontainable joy made my daddy-heart skip a beat.

Oh, if I could live in that moment forever!

Fatherhood on earth is a pale reflection of God’s eternal paternity, so I can’t help wondering if He feels the same way I do, giddily joyful with anticipation, when I round the kitchen corner toward the pantry door.  I also can’t help but feel pulse-pounding wonder, when, after selling His Son for thirty pieces of silver for the umpteenth time, his ever-surprising mercy again opens the door of my heart.

Pope Francis, through his Secretary of State Cardinal Bertone sent a special message this week for a meeting of the faithful held every year in Rimini, Italy. This year’s theme “The Human Person: A State of Emergency” prompted a reflection about how God is constantly on the lookout for each one of us.

“From the very dawn of humanity, after original sin, God sets out in search of man. ‘Where are you?’ He asks Adam who hides in the garden (Genesis 3:9.) This question, which appears at the beginning of the Book of Genesis and never stops echoing throughout the whole Bible and in every moment of the history which God, over the course of millennia, has built with humankind, reaches its highest expression in the Incarnation of the Son.”

I don’t know if it’s a failure to remember an idea and forget the book you got it from. But some forgotten book years ago taught me that the morality of the People of Israel was unique among ancient peoples. It wasn’t based on appeasing or pleasing the gods as much as it was on imitating God. Imitating his fidelity above all.  He seeks us. We have to seek as well. And anyone who has played hide-and-seek knows that the hiders eventually get a turn at being the seeker.

If you happen to play hide-and-seek with a group of kids of different ages, you will probably play the version of the game where the found former hiders become assistant seekers. Or the version when someone found cries out “Ollie Ollie oxen free,” which some say derives from the German “Alle, Alle auch sind frei!” (Everyone, everyone else is also free!) In the joyful context of Faith, the hiders-becoming-seekers is called Evangelization.

So a quick two-question conscience exam comes to mind: Did I hide from God today? Or rather did I let Him find me and join Him in the search for others?

Since God the Father is so much more than my imperfect reflection of his fatherhood, He tires even less of the game than now six-year-old Patrick used to. He sets out to find me everyday. When I seek Him, I always find Him already on the lookout for me. And the endgame is to be found for all eternity.

We are called to live with Him in wide-eyed surprise and uncontainable joy.  And we are all called to live that together. Oh, to live in that moment forever!