‘The Man’ and the Cross: The Story of a Cardinal Miscue? 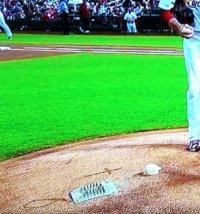 The cross on the Cardinals’ mound.

Stan Musial was honored by the American Catholic Hall of Fame but acknowledging his faith on the field was a step too far for some.

Any aficionado of baseball knows Stan the Man, the iconic major leaguer and historic face of the St. Louis Cardinals. When I was a kid, I couldn’t wait for spring training and the return of Cardinal baseball to Sportsman’s Park on the North side of St. Louis.

Everyone had their favorites whether it was Dizzy Dean, Joe Garagiola, Pepper Martin, or Country Slaughter, but everyone loved the “Man.” So, it should be obvious that this commentary is not being written by a closet Cubs fan taking a cheap shot at the archrival Red Birds.

What many may not know is that Stan Musial and his wife Lil, were devout and devoted pillars of the Catholic community in St. Louis. It should come as no surprise then that a groundskeeper for the Red Birds, steeped in the storied Cardinal tradition, felt moved to begin carving a cross and a #6 on the back of the mound at Busch Stadium as a tribute after his recent January 2013 death, to who Stan the Man really was.

Writing slogans on their caps, wearing arm bands in honor of recently fallen heroes, writing messages including crosses in the sand, pointing to the heavens after homeruns and similar personal gestures have been common in baseball for generations. The “offensive” cross on the mound was simple and was accompanied by the number six but later some claimed to see as for the Greek fish symbol used for Christ.

Before the news went public Cardinal General Manager John Mozeliak indicated he had already asked whoever was doing it to stop. He did not ask why they were doing it, he just said to stop doing it. He had heard about it from one of the Cardinal pitchers. The remembrance was so inconspicuous that few others even noticed them until an “anonymous” letter was sent to Mozeliak , to ask that it be removed. The writer, Michael Vines, acknowledged that the stadium was built by the owners with private money and was not a government entity, he expressed that he felt it “inappropriate” to be seeing those symbols on the mound. Evidently they had been there for each game all seasons before the controversy erupted. Has anyone else noticed the irony of this happening in St. (SAINT) Louis?

At first blush, this controversy reminds us of the various road side monuments we come across to remember the people who were killed at a particular site. These are on public land, so the apostles of a wall of separation between church and state, could legally petition to have them removed. It seems instead that this is more akin to a business responding to a customer who might feel offended by seeing a Christmas display at a movie theater.

Still, the “Holiday” decorations are placed by the owner of the establishment. Letter writing campaigns often encouraged businesses to protect their bottom line and remove the display. In this case, the inconspicuous message was not coming from the top Brass of the Red Birds, but evidently from one groundkeeper’s sense of the CEO of heaven and earth and eternity as the ultimate bottom line.

The gesture could probably have been handled quietly in house had it not been for the decision of the “anonymous” letter writer to go public with it in the St. Louis Riverfront Times.

When I grew up we lived two houses from the St. Louis City Limits. It was not uncommon for people to ask not what part of St. Louis you were from but what’s your parish. No one would have felt the need to question if “the Man” or any of other player wore a medal or cross around his neck. The St. Louis diocese, under the leadership of Cardinal Joseph Ritter, desegregated the schools even before the famous Brown vs. the Board of Education of Topeka case. Intolerance of another person due to race was not just considered uncomfortable to black ball players but a heinous sin. Cardinal Ritter went so far as to excommunicate lay people in the diocese who opposed his decision.

When Jackie Robinson played his first major league baseball game, it was former St. Louis Cardinal GM Branch Rickey who signed him to a Dodger contract and acting openly racial against intolerance. Both Stan the Man and Jackie Robinson have inherent dignity as children of God. Religious intolerance was nowhere to be found on the political left in the days of Jackie and the Man. Don’t know about other baseball teams, but I’d bet the Cardinals have gotten heat from media intelligentsia for its Christian night promotions in recent years. Those who might impute some animus to Cardinal GM Mozeliak are off the track in my view. No doubt the policy was as much an economic as social one.

Criticism has often been leveled against Mid-Westerners who are “too religious.” Journalist Tom Frank wrote a New York Times best seller officiously titled, What’s the Matter with Kansas. Though he was raised in Western Missouri, he could not understand how people could vote on social issues like prayer in schools and abortion when they should be voting in their own economic self-interest. Others have criticized people from “fly-over country” for leaning on their Bibles when times are tough. In modern American society the bottom line may be the almighty dollar but not almighty God at least as Christians view Him.

In a recent book titled Worshipping the State: How Liberalism Became Our State Religion, Benjamin Wiker refers to a sort of civic religion advanced by Rosseau. To him, Christianity preached nothing but servitude and dependence. More recently in the 1960s, noted historian Jewish intellectual and celebrated historian Arthur Schlesinger Jr. commented that Catholic baiting had become the intellectual game of the left that Jew baiting had been on the right.

Today, it seems that Christianity of any stripe (or any belief in a God who is more than a clockmaker) must be erased from public display not only by erasing symbols of it from a pitcher’s mound, but by consigning it as quickly as possible to the dust bin of history.

Christians can no longer sit by idly without letting businesses know that consumers notice how “enlightened” media are trying to pressure businesses where it hurts, at the bottom line. If we are to be accused of whining, so be it. Groups like the American Family Association and the Catholic League and, in a more academic vein, the Newman Society have been standing in the breach telling advertizers and mainstream media and “progressive” Catholic institutions of higher learning that they notice what is going on and are willing to bring such efforts to the attention of a broader consumer audience.

Probably the biggest problem to civic religionists who would create their version of heaven here on earth without any imagined restrictions like Ten Commandments, is the fact that the homeland of Christians is no here in this world but the world to come. So intolerance of Christianity and its symbols can be defended as the last acceptable prejudice because it advances “tolerant” civil religion.