The One Lesson we Most Need to Learn 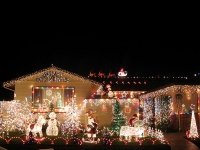 Americans love decorations. It is a billion dollar business. And we can’t wait to put them up. Driven by a commercial calendar, we throw up spiders and bats in mid-September, and, once we have trick-or-treated, the orange and black yield to green red and gold. When after Christmas sales have gone, New Year’s will give way to Valentine’s hearts in single digit dates of January.

Curiously, rarely do I see a blue balloon on a mailbox during the seventh month of pregnancy. Perhaps someone will send an e-mail or Facebook update after a sonogram, but, until the butt-slap scream echoes loud and clear, the cigars tend to stay in the box. Then it’s out with the blue or pink balloons until even a few days after the baby comes home.

One could easily argue that there is no commercial marketing trend associated with the birth of one baby. (Tell that to the Brits who went all barmy over baby George this summer.) But one could also argue that it is easy to anticipate an idea. It is always risky to anticipate a person, since so many things can go wrong with a pregnancy and delivery.

Advent teaches a host of lessons, but perhaps the most important one for us to learn is that Christmas is not a lock. Joy to the world does not necessarily mean joy to any single individual. It all depends on how one receives this special Prince, and reception demands preparation.

The one thing we most need to learn is how to wait. And waiting means preparation. Waiting means not living with a sense of entitlement. Waiting means being aware that, when Christ comes, there is a real possibility that He does not come for me. Not because there is anything lacking in his infinite love, but because much can be lacking in my attitude. “He came to his own, but his own received Him not.”

The Church has always taught that Advent is a penitential season. A woman in her last month of pregnancy is tired yet often can’t sleep well; she often feverishly nests to prepare for the birth, even as she worries about the pains of delivery.  Mary in her expectancy is an icon of the Church in Advent.

It seems a bit presumptuous to tuck into the eggnog and cookies way before the gold and frankincense.

Pope Francis’ central themes are mercy and joy. Joy is not gratification, but fulfillment. And there is nothing more fulfilling than rejoicing at an event whose gratification has been delayed. It is the joy of mercy, of knowing I deserve a life in a debtor’s prison and having that debt suddenly, unexpectedly forgiven.

Living Advent as a time of preparation is counter-cultural, for sure; so is leaving up the Christmas tree a few days past the big day, when many of your neighbors are gearing up for Valentine’s day. But it is a witness to a very startling fact: we are celebrating not an idea but a Person. And that Person’s arrival is to be a joy that is shared with the whole people. The ones who have a “been there done that” attitude and are christmased out before Christmas may have had some gratification, but may also have numbed themselves to the very fulfilment the coming of Christ promises.

So, as Advent progresses through O Come, O Come Emmanuel, may we all long for deliverance, “in sin and error, pining.”

And may we learn the greatest Advent lesson of all: to forgo our wants and desires in order to empty our hearts in preparation for the One Thing Necessary.