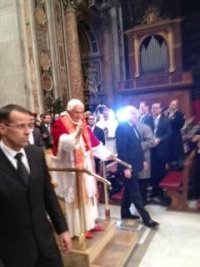 By Stephen D. Minnis || What follows is the contribution to a National Review Online Symposium by the President of Benedictine College.

Pope Benedict XVI was a true academic and a great Pope. If you look at his life, you see that he was a fighter, not a quitter, so I have to believe that his decision to resign is of a piece with the rest of his decisions: He is doing what’s best for the people in his care.

Ratzinger saw firsthand the sacrifices of academic freedom — his favorite professor had to flee the country because he wouldn’t stop teaching what the Church teaches. Ratzinger also saw what a real Catholic college looks like. After the war, students and professors had to bunk together in second-rate lodgings. They lived, prayed, and ate together, and together sifted through the rubble to rebuild their school.

It is no wonder then that when he met with Catholic university professors in America in 2008, he told us that our job was to “love our students.” He knew what he was talking about — and I, for one, was inspired by what he said to understand my job differently.

Those of us who met with him to discuss Ecclesia in America last December saw a man determined to keep building the Church, and to keep teaching the truth. We saw him send his first tweet. We got to hear him at Mass and at his audience. But we also saw him give a bouquet of flowers to Our Lady on the feast of the Immaculate Conception and pray to Our Lady of Guadalupe on her feast day.

It was as if the “professor pope” was teaching us something new. The Church isn’t in his hands, ultimately. It is in the hands of God and the saints. We have no reason to fear for its future.