The Silence of the Word 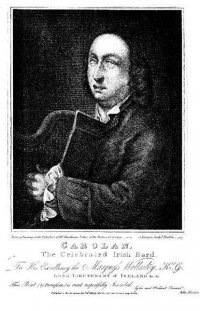 Turlough O’Carolan is a man whose life is close to legend. Sightless due to smallpox at a young age, possibly illiterate, he became one of Ireland’s wandering minstrel harpers and a great composer, bridging between older, Gaelic style harping and other styles that were, at his death in 1738, seen by some as too modern.  When he sensed death was near, he composed his last piece, O’Carolan’s Farewell to Music, a hauntingly beautiful melody. When its last coda resolved its last chord, he bade the harp adieu.

Music was something that he loved intensely. His blind, elderly fingers deftly plucked the harp as few ever had, and yet, ere the end, he chose to say goodbye, put down his harp, and wait in silence. His mute strings sang out those arcane, eloquent truths, the ones so deep they are only sounded in silence.

You may well watch Pope Benedict XVI walk out of this Wednesday’s audience with O’Carolan playing in your ears.

During Sunday’s Angelus message, Pope Benedict, for the last time, opened the Sunday readings for us, this time speaking of Christ’s Transfiguration and its lesson about the “primacy of prayer.”  It is time, he said, that he, personally, heed God’s call to climb the mountaintop and await in silent meditation, far from the activism that can cause even those in ministry to forget that if God builds not the house, in vain do the laborers toil.

As the press within and without the Church jostle for position like Sunday’s Indy 500 drivers and make about as much noise, Pope Benedict, the tireless preacher and life-long teacher of the Word, is making a stunning statement, which we would do well not to miss. God’s voice did not come to the prophet in the earthquake clash, but in the whispering wind.

If there was a buzzing press corps covering O’Carolan, I’m sure they would have speculated about his sanity, his arthritis, his family, his frustration with those who thought his music was too progressive or too old fashioned.  But behind the harper’s earth-dark eyes, an inner light was shining, high above the ruckus of Roscommon.  His silence was not protest but completion, like the hushed moment after the orchestra ceases and before the conductor turns to receive the crowd’s applause.

When I read Pope Benedict’s works, what strikes me is not so much how many times his words impress me as how many times I find myself lifting my eyes from the page and staring in silence.

I read a small book by Hans Urs von Balthasar some years ago entitled “The Silence of the Word.” It was about a series of woodcuts that Albrecht Dürer had done depicting St. Jerome.  Dürer was clearly in meditation with Jerome, capturing  those moments when St. Jerome, a man of many words, a translator of God’s Word, held his silent quill aloft, that moment of understanding deeper than words can express.

Pope Benedict will give perhaps his greatest lesson not in his words this Wednesday, at his last audience, but in his silences Wednesdays hence. Don’t blink. This is beyond history. It is beyond poetry and almost beyond theology (not beyond the “theo-“ but the “-ology.”)

It is not frustration but fulfillment, not compromise but completion. Not an emptiness, but an emptying.

When you hear O’Carolan’s Farewell, your first reaction is not to hear it again, but to hear nothing for a while, as if the ear were filled, at peace with sound forever.

Eight years ago, the papal press prophesied that anyone following the wonderful, powerful words of John Paul II would have a steep climb.

I wonder if it won’t be just as hard, -if not harder,- to trudge down from the mountain and follow Benedict’s silence…