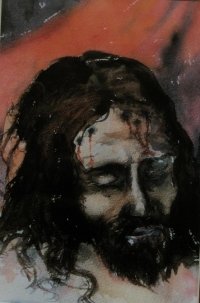 From a human point of view, Jesus must have felt deep discouragement as he came to the close of his public ministry.

He came to show God’s love for humanity, but he met with hostility and rejection.  He came to teach us God’s plan for human life and human interactions, but many turned him off and rejected his teachings, including the religious leaders of the day.  He gathered a select group around him, with whom He shared his confidence, and led them into a deeper understanding of his identity and mission.  But one of the Twelve betrayed him and the others abandoned him when his hour of trial arrived.

Jesus must have wondered if his efforts would have any success, if the people He came to help would accept Him and would cooperate with God’s plan for them.

The first reading is the third Suffering Servant Song from Isaiah.  Isaiah foreshadows Jesus.  “The Lord God has opened my ear, and I was not rebellious, I turned not backward.  I gave my back to smiters, and my cheeks to those who pulled out my beard; I hid not my face from shame and spitting” (Is 50:5-6).

Now, in our times, you and I are called upon by the Lord to bring the message of God to our contemporaries.  In the public square we are to present God’s plan for the human race, with courage and conviction.  We propose, and defend, God’s plan for marriage and family, his plan for human life and fertility, and his plan for how the nations are to live together in peace and justice.

As happened to Isaiah, to Jesus, and to his faithful disciples, we too can expect to receive only a partial, conditioned acceptance.  Sometimes we shall meet hostile opposition.  Christianity has always met opposition when it engages with the prevalent culture.  Advancing the good often comes with a price.  Giving resistance to evil is usually not gladly received.

The world is much better for the suffering of Jesus and his faithful followers.  Without Jesus, and his acceptance of the Cross, the world would be left in total darkness and would eventually drown in its self-absorption.

During this Holy Week, may we identify closely with the Lord as He reenacts the great deeds that brought about our salvation.  May each of us be drawn into a deeper relationship with our God, who laid down his life for us.

Want to contact Father Matthew?  Email him at mhabiger@kansasmonks.org.