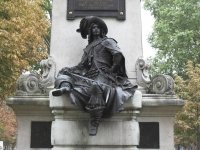 I don’t know if any group of Muslims sends the Vatican Easter wishes. I do know that the Vatican always sends a message for the end of Ramadan. (To its credit, so does the World Council of Churches.) In a world where political and religious divisions seem to grow exponentially, it is important to see the Church giving witness to what unites all mankind.

The Pontifical Council for Interreligious Dialogue published a message today greeting Hindus on the upcoming feast of Deepavali, which begins November 3rd.  At first glance, it would seem like the Catholic Church has no reason to share “best wishes” with Hindus. Monotheists and polytheists don’t really have many beliefs in common, so why even bother? There is no section at the Hallmark store for “Good luck believing all that wrong stuff” cards.

The fact is that the Catholic Church is on the side of humanity, and is always looking for common ground. Although Catholic and Hindus do not share many common tenets, the Vatican’s greeting shows that they share a common enemy. And that enemy is selfishness engendered by materialism.

“Sadly, with the increase of materialism in society and a growing disregard for deeper spiritual and religious values, there now exists a dangerous trend to accord the same value to material things as to human relationships, thereby reducing the human person from a ‘someone’ to a ‘something’ that can be cast aside at will. Furthermore, individualistic tendencies engender a false sense of security and favour what His Holiness Pope Francis has described as ‘a culture of exclusion’, ‘a throwaway culture’ and ‘a globalization of indifference’.”

The reason the Church can reach out like this is because the Catholic Faith builds on the truth about man, and is never afraid of the truths of human nature. And one of those truths is that, in order to build a society that merits the name of “human” at all, we have to practice the principle of solidarity.

Solidarity is a virtue as well as a principle of society, and it is best described by the rallying cry of Alexander Dumas’ Three Musketeers: “One for all and all for one!”

Selfishness, where I close myself in on my own needs, wants, and goals is the antithesis of solidarity. It leads me to see everyone else as a means to my ends. Everyone I see is a stone to step on or an obstacle to be cleared away for my own advancement.

What is true of a family (and Pope Francis had much to say about the family this past weekend) is also true of the larger human family:

“The promotion of a ‘culture of relationship’ and ‘a culture of solidarity’ is thus imperative for all peoples, and calls for the fostering of relationships based on friendship and mutual respect for the benefit of the entire human family. This requires a common recognition and promotion of the intrinsic dignity of the human person. It is evident then that friendship and solidarity are closely related. In the end, a ‘culture of solidarity means seeing others not as rivals or statistics, but brothers and sisters’ (Pope Francis, Visit to the Community of Varginha (Manguinhos), Rio de Janeiro, 25 July 2013).”

One does not have to be a player on the world stage in order to practice the virtue of solidarity. When with my family, friends and colleagues, am I trying to get my way, or am I at the service of others?

I must confess that I fall short of this, but if I am honest, I am happiest when I open myself to an attitude of service. I also learn the most when I am open to others.

By greeting Hindus on Deepavali, the Church is not saying that all religions are the same. She is saying, though, that all people are the same. We all flourish when we open ourselves to others and work for the common good.  We are all at our best when we adopt and live the Musketeer philosophy. In the Catholic Faith, we find the full strength of grace to break out of the centripetal force of selfishness.

We will get nowhere in Evangelization if we don’t value and care about every person we encounter. In fact, if we don’t care, true human encounter isn’t even possible.