They aren’t picking the next CEO of GodMart! 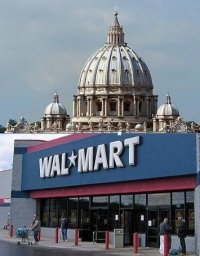 My students probably think I’m pretty patient. My kids know I am not. (Part of the reason is my kids tend to see me after my students have made me already spend my daily allowance of patience.) But my patience is wearing thin with the plethora of articles, from inside and outside the Church, that basically sound like this: “The Church is a business with a PR problem, and I am an author who will now wittily tell you what I think and who the next pope should be, blah blah blah.”

Would you continue reading something that starts with a premise that misses the point completely? “Since McDonalds is little more than a plot masterminded by the Red Chinese and the Illuminati…” Please.

Don’t even get me started on the conspiracy theorists…

The Holy Father explained in simple words the reasons for his decision. He is a straightforward person. Take his words at face value. The serpent got Eve to sin because he got her to hear God’s words not as the words of a Father, but of a power-monger. If you catch yourself doing that habitually with the Church, you’re in bad company.

The Church cannot be understood from the outside. Her essence, like the Lord whom she serves and whose Mystical Body she is, is both divine and human. An interregnum is when the Church has no visible head on Earth, and when the invisible action of God in the Church is perhaps most dominant. And when there is so little to go on, visibly speaking, it’s better not to theorize.

The “business” of the Church, some say, is to save souls. Untrue. The business of Michelangelo’s chisel was not to sculpt statues. That was Michelangelo’s business. The chisel’s business was to follow the guide of the master’s hand, and to resist when the hammer stroke fell.  The “business” of the Church is fidelity to God, serving the Father, through the Son, in the Holy Spirit.

So mass attendance stats or the number of complaints about Church teaching are not performance parameters for a pope or for the Church as a whole.  She is trying to share Christ’s message, not gain adherents. If the message is delivered intact, and people reject it, that is ultimately the mystery of human freedom. Evangelization is not PR. The Cardinals’ task is not to increase shareholder satisfaction. They aren’t picking the next CEO of GodMart!

And yet, our dear and frail Holy Father does so much resemble the Father in Rembrandt’s “Prodigal Son,” who so resembles the Father in Jesus’ parable. The Church is like that father, sad because he can’t get his son to open his letters to him, waiting by the side of the road expectantly. He’s trying to figure out which of the older, “righteous” brothers can attract the younger brother back home.

But to see that as a PR problem is seeing this the wrong way around. The Church is not selling anything to anyone, she is administering a cure for unhappiness. She is trying to convince a crazy, out-of–its-mind world to come to its senses, and to start the long journey home to an embrace of mercy.

So let’s worry less if we get the pope we want. Too much focus on “what we want and, and what we’re gonna get” ruins Christmas.

Every pope is a gift of God for the Church. Both his strengths and his weaknesses are gifts for the Church. Instead of wasting time speculating and playing the College of Cardinals like a stable of ponies, let’s do what the Holy Father has asked. Let’s pray, in joyful expectation, so when the white smoke rises, it will not be a question of disappointment because our guy didn’t win, but a loving and soul-searching acceptance of a new Visible Head of the Church.

We are not asked to gauge how much we will trust or follow the next pope. That is not faith. We are to embrace all the Holy Father teaches on matters of faith and morals, no matter who he is, for he speaks as Christ’s Vicar.

It is God’s choice, not ours. The fact that God has willed that his choice come through the votes of 117 human beings as imperfect as I am makes it all the more wondrous. Let’s live Lent this year as it always should be: a time of sacrifice in the name of joyful expectation of -and thanksgiving for- great gifts to come.