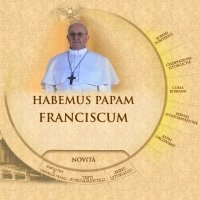 I have just watched the new pope come out on the loggia with 300  plus screaming Benedictine Ravens. (You would have thought Kansas won the NCAA tournament, it was louder than that.) Eyes teared up at the announcement of the papal election of Jorge Mario Cardinal Bergoglio, now Pope Francis I.

I would like to offer some quick  insight. The three keys to his pontificate will be humility, reform and evangelization.

Humility: You saw it. His first act as pope, before blessing his people, was to pray for his predecessor and then to bow down before his flock and ask for their prayers. Even as Cardinal Archbishop of Buenos Aires, Jorge Mario Bergoglio lived in a small dwelling, not a palace, cooked for himself, and often took public transportation. He is a Latin American Jesuit with a huge heart for Social Justice, and yet distanced himself early on from currents of “Liberation Theology,” which would have us practice the Gospel seen through a Marxist prism. Such a stance may have made him unpopular in his seminary days. It takes humility to buck trends and stick to the truth. It takes humility to recognize your own weakness and ask for prayers. It takes humility to live humbly as a prince of the Church.

Reform: Pope Francis has worked with the Curia, but he is an outsider, not an insider. He said the cardinals went to the “end of the earth” to find him. And he picks a name not ever used before. This marks something new. Francis of Assisi was asked by God to rebuild his Church. He at first thought it was the run-down church of San Damiano. He soon learned it was the whole Church, through a humble living of the Gospel.  Pope Francis I will be a man of reform. He has an Italian last name but a new fresh perspective. It will not be business as usual in Rome for long.

Evangelization: For a Jesuit, the first Francis that comes to mind would not be the Poverello of Assisi, but St. Francis Xavier, one of St. Ignatius’ first “Company of Jesus,” whose native language, Spanish, Jorge Bergoglio shares. Converted as a young man in college, St. Francis Xavier went to the ends of the earth to preach the Gospel, including Japan, before dying on his way to China. At the upcoming World Youth Day in Rio de Janeiro, you will hear the new Pope tell the youth of the world that story and challenge them to be like Francis Xavier. Bet on it. This will be a pontificate that is marked by a reinvigorated New Evangelization.

The world press has spent weeks speaking of scandal and troubles in the Church. I watched hundreds of college students tear up because they have a new Father in the Faith. We are not seeing the same reality.

The Holy Father, stunned as any humble man would be by such a weight, is not blind to Church problems, but sees the Church I saw today at Benedictine College: young, faithful, vibrant. He is the man the Holy Spirit has chosen to lead this young Church through troubled seas with humility, reform and above all evangelization!