To Sing is to Pray twice: America, America God Mend Thine every flaw 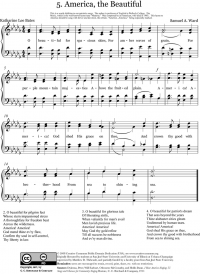 As we drink in the joy and pride today that our national heritage provides and we pray for the souls of those who put their lives on the line to make this celebration possible, it dawns on me that we should listen well to the words of many of the traditional American Anthems.  St. Augustine reminds us that “He who sings prays twice.” We might well take to heart some of the words that are really prayers of petition and thanksgiving being offered to the author of all freedoms.

One of my favorites is  America the Beautiful.  After rhapsodizing over amber waves of grain and purple mountain majesties, and how the Pilgrims beat a thoroughfare for freedom, we are reminded that it was God’s grace and brotherhood that were at the root of the successes of a free people.  In the second verse of that song, the one few people seem to sing, it reminds us that a free people can be self-congratulatory and forget human failings.   “America, America, God mend thine every flaw.  Confirm thy soul in self-control, thy liberty in law.”

How easy it is in today’s “tolerant” and “non-judgmental” age, to confuse liberty with license.  Put another way, “each of us can do our own thing.”  Liberty was viewed by our forbearers as ordered freedoms exercised with our neighbor, our national good, and our God in mind.

How often have we heard people say, its a free society and I can do whatever I want; or who made you the boss of me?  The founders knew that a majority rule system may make decisions but they will not always be in the best interest of the people whose rights were not tossed to the people by government like so many crumbs on the table at the seat of power in Washington.  The founders also realized that the rule of law system was designed to make sure that no one would become a second class citizen compared to his or her neighbors when it came to protections under that law.  Too often, sadly, many citizens view government as being responsible for leveling the economic playing field.  History tells us that leaves poor citizens in the position of being beholden to the government so that they might receive scraps from the table as a group while their individual worth (bestowed by God) gets lost in the one-size fits all mentality which serves but does not empower.

The beauty of the federal system with its state and local sensibilities was that it valued  local communities in their ability to see their neighbor’s problems first hand without having to seek guidance from an overarching federal bureaucracy no matter how skilled and well intentioned.  Government, especially coming from the Nation’s Capital, need to confirm itself in self control and draw on the experiences of local communities to find out what works best.

As I write this, my mind returns to a conversation I had a number of years ago outside the office of newly minted Bill Clinton Chief of Staff Leon Panetta.  The conversation was with Ira Magaziner, the designer of First Lady Hillary Clinton’s Health Care initiative.  He seemed to find it interesting to be talking to a political scientist, public policy analyst and Presidency person from fly-over country (ie. Missouri.)  He wanted to know why Hillary Care didn’t work.  To me, the problem came down to two things that killed it: a) it was crafted in secret, and b) it did not include those who would be asked to make it work where the rubber hits the road.  Just because the federal government has the power to do things, does not mean it should do them or can do them more effectively than local communities and the private sector.  This is especially true when individuals outside the DC beltway are not consulted or even taken into account.

A top of the line public policy analyst,  iconic politic scientist  and colleague from the University of Virginia, Professor Martha Derthick, wrote about Hillarycare in a Washington Post op-ed. piece prior to election 1994:  “In many years of studying American social policy, I have never read an official document that seemed so suffused with coercion and political naivete . . . with its drastic prescriptions for controlling the conduct of state governments, employers, drug manufacturers, doctors, hospitals and you and me.”

The current decision to put off until 2015 the implementation of major segments of the Affordable Care Act (aka Obamacare) announced yesterday, July 3, 2013 when examined in light of Derthick’s almost twenty year old column,  suggests that self-control and respect for liberty on the part of decision makers, should  always be valuable yardsticks for policy analysis and for “mending every flaw.”