Top 10 Rio Quotes: What Francis Said (and Why) 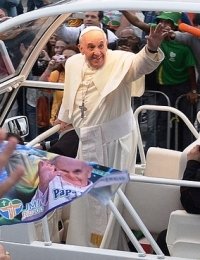 Here are my favorite Pope Francis World Youth Day quotes (in chronological order), and my case for why they are important.

1. Since so many people are gloomy about the Church’s future after defeats, he said:

“Christians cannot be pessimists! They do not look like someone in constant mourning. If we are truly in love with Christ and if we sense how much he loves us, our heart will ‘light up’ with a joy that spreads to everyone around us.”

— Pope Francis, July 24, 2013, Mass in the Basilica of the Shrine of Our Lady of the Conception, Aparecida, Brazil

2. Because even hardcore Catholics are infected by today’s ubiquitous pop culture, he said:

“Nowadays, everyone, including our young people, feels attracted by the many idols which take the place of God and appear to offer hope: money, success, power, pleasure. Often a growing sense of loneliness and emptiness in the hearts of many people leads them to seek satisfaction in these ephemeral idols. Dear brothers and sisters, let us be lights of hope!”

— Pope Francis July 24, 2013, Mass in the Basilica of the Shrine of Our Lady of the Conception, Aparecida, Brazil

3. One great moment was when he repeated his insistence on not being duped by our hopeless world.

4. He warned against simplistic economic solutions to problems.

5. Because he sees ecclesial complacency as an enemy of the Gospel, he called young people to radical witness.

“Let me tell you what I hope will be the outcome of World Youth Day: I hope there will be noise. … I want you to make yourselves heard in your dioceses, I want the noise to go out, I want the Church to go out onto the streets, I want us to resist everything worldly, everything static, everything comfortable, everything to do with clericalism, everything that might make us closed in on ourselves.”

6. Because he detests Christianity that is reduced to activism, he stressed interior change.

“Do not water down your faith in Jesus Christ….  With these two things you have the action plan: the Beatitudes and Matthew 25.  You do not need to read anything else.”

— Pope Francis July 25, 2013, Welcoming Ceremony to the Young People on the Copacabana waterfront

7. He rightly worries about his bishops, and also about lay people who use bishops as their excuse.

“How horrible is a sad Bishop! How bad is that! So that my faith might not be sad, I came here to be filled with your contagious enthusiasm!”

8. Because he is painfully aware that the Church has grown irrelevant in many sectors of society, he said:

9. Because he knows that the media culture is trying to create an “entertain us” generation, he said:

“Dear young people, please, don’t be observers of life, but get involved.  Jesus did not remain an observer, but he immersed himself.  Don’t be observers, but immerse yourself in the reality of life, as Jesus did.”

10. Because he knows that Christianity will fail to the extent that it is a holiness club, he challenged:

“Do not be afraid to go and to bring Christ into every area of life, to the fringes of society, even to those who seem farthest away, most indifferent.