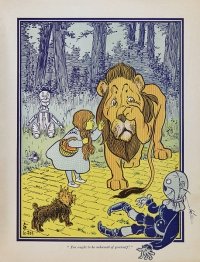 One of W.W. Denslow’s illustrations for the first edition of The Wonderful Wizard of Oz

People are worried about bringing together the Scarecrows and Tin Men of the Catholic Church. But I know who the real hero of The Wizard of Oz is…

Fr. Dwight Longenecker has published interesting reflections lately about the different kinds of Catholics he comes across in his parish. There is the “Peace and Justice” crowd, aging hippies who are all about the heart, whom in another post he likens to the Scarecrow from the Wizard of Oz (presumably because they are all heart but need more in the head.)

Then there are “Piety and Purity” Catholics, who are “head” Catholics, centered on dogma, but may come across as somewhat stiff. The Tin Man without the oil can. All head, but in need of a heart.

His solution is that we all need courage to bring us all together in the Church. Nicely done.

But I have a slightly different take on it.

It matters little that the film premiered 74 years ago next week. I live in Kansas across the street from a girl named Dorothy. (I kid you not.) So I know of what I speak.

It is Toto, and only Toto, who disregards the Wizard’s injunction, “Pay no attention to the man behind the curtain.”

We have to pay a lot of attention to the man behind the curtain. That is a lesson I learned from one of my heroes, the soon-to-be- St. John Paul II.

What is the vision of the human person that is behind our culture, behind the movie we’ll see this week, behind the political party we favor, behind the billboard we gaze upon?  What do they tell me about who I am? About what I can hope for? About what my purpose is?

And… does that match up with the vision of the human person that Jesus Christ reveals? Am I, by my choices, my purchases, my votes, funding and furthering the opposite of what I profess to be the truth on Sunday?

I was made in God’s image and likeness, a being fallen but redeemed by the Blood of the Son of God, and I all too often sell myself short as a mere creature of instinct that must placate its pangs of eternity with quick-fix shots of satisfaction with a chaser of emptiness. I am an adopted prince of the Royal Family of the Universe, and I let my culture treat me like a cog in a machine or a stooge to hit up for a buck for some tinselly trinket.  I freely purchase the chains that enslave me. I have no one else in church to blame for that but me.

Yes, maybe the dog was more courageous than the (formerly) Cowardly Lion after all. Toto didn’t fear the flames, the amplified voice, the distorted image of man projected on the screen.  I fear being different, I struggle to hear the voice of my true Shepherd over the din, and I don’t seem strong enough to turn off the screen that distorts my own image of myself.

Before figuring out what kind of Catholic I need to be, I have to figure out (not invent, but discover) what type of human being I am. And I cannot do that without Jesus Christ and his Church. That is what John Paul II taught me with his words and with his life. “The ideology of the ‘death of God’ easily demonstrates in its effects that on the ‘theoretical and practical’ levels it is the ideology of the ‘death of man.’ ” (Dominum et Vivificantem, 38)

And here is where courage kicks in, but it is not the courage that the Cowardly Lion receives. It goes way beyond throwing water on Wicked Witches. Or clicking your heels because you “forgot” how to get home but had the ability all along like some Gnostic Dorothy.

No wizard in the universe can grant courage like that.  I can only beg it on my knees from the Lion of Judah.