Twelve Days of Christmas Review of 2013 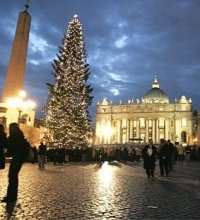 What’s the best answer to Christmas sentimentality? The Christmas season liturgy. In the days that follow Christmas, the Church brings us the slaughter of innocents, the first martyr, and more.

Christmas isn’t just sugarplum fairies and Santa Claus after all.

It is good that the Church does this, because if you compare each day from Christmas to Jan. 6 to the top news stories of 2013, you see that we are facing the same kinds of challenges Christ’s people have faced from the start. Here is a 12 days of Christmas review of 2013.

“He came to what was his own, but his own people did not accept him,” says the Gospel read on Christmas Day.

In 2013, the year of the atheist monument, we are rejecting him still. Some recent headlines:

St. Stephen was the first Christian to discover that Jesus really meant what he said: “You will be hated by all because of my name, but whoever endures to the end will be saved.”

In the biggest missed story of the year, our brothers and sisters were killed in droves because of his name in 2013. A few headlines:

The Urgency of Evangelization

“The best defense is a good offense,” that could be a motto for the Church in 2013, which continued the push for the New Evangelization begun by Pope John Paul II.

While political voices tried to make Pope Francis’ Evangelii Gaudium about economics, the Catholic press noticed what it was really about:

December 28, Feast of the Holy Innocents

In Christ’s time, Herod ordered infants killed because he feared Christ. In our time, we still kill infants – the unborn – out of fear.

The year 2013, the year human stem cells were finally created by cloning, was a year of abortion victories and disgust, from the enormous March for Life to the Obamacare promise of government-provided abortion in our future. Here are some headlines:

December 29, Feast of the Holy Family

The Holy Family started a revolution in family life and the Christian exhortation to spousal love became the building block of a great civilization.

In 2013, we saw that building block continue to be dismantled by changing the very definition of marriage from the definition it has had in every culture in history and every religion:

“Will no one rid me of this archbishop?” said King Henry about his old friend, St. Thomas a Becket, who insisted on the rights of the Church.

In 2013, an aggressive government and secularist society are still trying to silence religious opposition:

Mary, the Pope, and the World

“In the last hours of every solar year,” people mostly party, said Pope Benedict XVI on his first New Year’s Eve as Pope. “The Church is called to live these hours making the Virgin Mary’s sentiments her own.”

In 2013, Pope Francis spent his pontificate making the Virgin Mary’s sentiments our own:

The Wars of Barack Obama

Since 1968, popes have issued a World Day of Peace address on Jan. 1 of each year. This year Pope Francis issued his on his first New Year’s Day in a pontificate that has been marked by his pleas for peace.

Francis’ pleas have been directed at an increasingly bellicose United States, as Obama continues to embarrass the Nobel Peace Prize commission with his warlike ways. Even former allies have turned against him:

The Year of Two Popes

Saints Basil the Great and Gregory Nazianzen, Bishops and Doctors of the Church, were close friends. One was known for resigning his post, and one was known for his service to the poor.

Remind you of anyone? In 2013, we had the unusual privilege of two living popes (one pope and one emeritus):

Pornography and the War on Women

St. Genevieve was a kind of prefigurement of Joan of Arc in France, a strong woman who inspired a military defense.

In Camelot, Guinevere prayed to St. Genevieve: “I won’t be bid and bargained for like beads in a bazaar!” We have come a long way since then. I feel the need to warn about the content of even the news stories about the real war on women:

St. Elizabeth and St. John, pray for us! Education once again became a battleground in the United States as Common Core standards became the hotly debated new attempt to raise U.S. standards:

When the great Magi of the East finally found the king they were seeking, says Pope Benedict, they found themselves “bowing down before the child of poor people. They had to change their ideas about power, about God and about man, and in so doing, they also had to change themselves.”

Power still hasn’t learned to bow. The year 2013 was filled with stories about the abuse of power in the United States:

Today in the United States we celebrate Blessed Andre Bessette, whose life showed the value of face-to-face contact with real human beings. The Montreal doorman’s funeral was mobbed by well-wishers.

We need to rediscover face-to-face contact. Just as television revolutionized an earlier generation, smartphones (and Facebook and Twitter and the other addictive additives in them)  is revolutionizing a new generation, making connection easier, faster – and more anxious and superficial … as these headlines attest:

At the Register, my wife and I suggest the social media revolution is hurting family relationships enough that your New Year’s Resolution ought to recognize that.

Pray for the terrible problems in the world, but take courage in the fact that we have seen it all before. And as we learn this Christmas season, Jesus Christ and his Church can more than