We Are the Civil Rights Movement Now 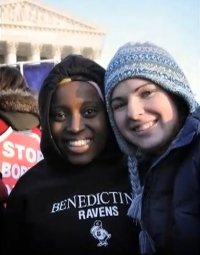 Benedictine College at the March for Life.

Forty years after Roe v. Wade, it is the pro-life movement that marches in Martin Luther King’s footsteps.

Consider the last full week in January as a week-long statement on civil rights in America. It started with  Inauguration Day — a day to be grateful for the civil rights progress represented by the second inauguration of Barack Obama, the first black president of the United States.

The week ends with the March for Life today — a reminder that the dream King marched for is far from fulfilled.

“When the architects of our republic wrote the magnificent words of the Constitution and the Declaration of Independence, they were signing a promissory note,” King said. “This note was a promise that all men, yes, black men as well as white men, would be guaranteed the unalienable rights of life, liberty, and the pursuit of happiness.”

He added: “It is obvious today that America has defaulted on this promissory note.”

Many people hated Martin Luther King Jr. and his cause. They hated him not because he was wrong, but because he was right. Nothing makes us more angry than those who take the side of the voice in our conscience that we are trying to silence.

The movie Lincoln reminds us that people hated the abolitionists in their day, too. To get the 13th amendment passed, outlawing slavery, Thaddeus Stevens has to hide his belief in racial equality. People feared racial equality because it would change their lives too much, and they hated abolitionists for insisting that truth is more important than lifestyle.

This year, the media will cover the Second Inauguration in a major way: They will tie it to Martin Luther King Day, celebrate the progress in civil rights, but then they will ignore the March for Life.

That does a disservice to the great man who said in his Letter From Birmingham Jail that he saw his task as “bringing our nation back to those great wells of democracy which were dug deep by the founding fathers in their formulation of the Constitution and the Declaration of Independence.”

Growing up in the 1970s and 1980s, I was enthralled by Martin Luther King Jr. and the civil rights movement. My mother, a Mexican who suffered from America’s racial tensions, made sure we knew what was at stake in questions of prejudice and human rights. I still remember seeing tears stream down her face when my own daughter memorized much of King’s “I have a dream” speech and recited it for her.

But from the first, she taught us to be pro-life as well. In that we were not alone: The civil rights movement rightly saw abortion as the next grave threat to human rights in America. Figures like Rev. Jesse Jackson, Sen. Edward Kennedy and Al Gore were all pro-life — at first — in the 1970s.

But then the temptations of money and lifestyle once again overcame the truth. The money came from the abortion industry, the very caricature of callous big business. The lifestyle threatened here wasn’t the plantation system or segregation, but the sexual revolution. Abortion is the ultimate safeguard of the sexual revolution. Even with readily available contraception, sexual promiscuity on the scale we see today would be impossible without abortion.

My mother made sure we watched the classic movies of the civil rights movement. One of my favorites was Raisin in the Sun, the Sydney Poitier movie based on the play.

It was about a black family moving into a white neighborhood. It was also, ironically, about how money and abortion tempt people to abandon the principles of civil rights.

After foolishly investing his mother’s nest egg, young husband Walter Youngers is given a chance to make a handsome profit — if he accepts a neighbor’s offer and sells out of the white neighborhood.

Mama is the voice of the conscience of black America. Here is how the play’s text presents it:

“Mama. (advancing resolutely) Son — I come from five generations of people who was slaves and share croppers — but aint nobody in my family never took no money from nobody that was a way of telling us we wasn’t fit to walk the earth. We ain’t never been that poor. (raising her eyes and looking at him) We aint never been that — (voice breaks and she turns away, unable to continue) — dead inside.”

What are abortion funds but money that proclaims a class of people — the unborn — unfit to walk the earth? And  millions of pro-abortion dollars flowed to Obama in the 2008 and 2012 elections according to opensecrets.org.

But Mama’s pro-life argument was more explicit when her son’s young wife announces that she plans to abort their new child. Youngers says nothing, but Mamma speaks up.

“Mama. I’m waiting to hear how you be your father’s son. Be the man he was. (Pause. The silence shouts.) Your wife say she going to destroy your child. And I’m waiting to hear you talk like him and say we a people who give children life, not who destroys them — (she rises) I’m waiting to see you stand up and look like your daddy and say we done give up one baby to poverty and that we ain’t going to give up nary another one. …. I’m WAITING.”

Today, those of us who believe in the promissory note of the Declaration of Independence are still waiting. We are waiting for the self-proclaimed champions of civil rights to admit that “all men are created equal, that they are endowed by their Creator with certain unalienable Rights, that among these are Life.”

Those words don’t exclude anybody — not Native American Indians, not Mexicans, not African-Americans … and not the brothers and sisters, sons and daughters,  we see only through ultrasound windows.

The pro-lifers who flood Washington today will see the inauguration in the right perspective — one step forward and two steps back in a civil rights battle that is far, far from over.

And we are humbled and a little frightened to see that we who refuse to ignore the right to life are the real civil rights movement now.