What Do You Really Believe? The Many Gods of American Culture 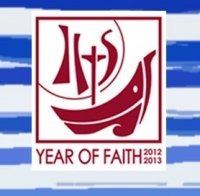 Yesterday, the Church celebrated the feast day of St. Thomas the apostle beloved in India for bringing the faith in the one true God to a place that believe in many gods. Father Richard, associate pastor at our parish, came to us from India. He shared with us the rich devotion that Indians have to St. Thomas the apostle who brought them the faith at great personal sacrifice.

St. Paul when he bought faith in Christ to the Greeks who also believed in many gods, noted there was a monument to the unknown God. It was a perfect segue for him to the one true God.

We may be called to be a St. Thomas and a St. Paul in this Year of Faith. How do we witness to a God who we cannot see in a culture that worships gods of self, material advancement and science among others?

There are those, today, who would prefer to squeeze references to God out of the public discourse. As a result, there are many well-meaning Americans who are virtually clueless about Christian symbolism which had been common knowledge decades ago.

For over 30 years, I taught in state colleges and universities. One Ash Wednesday when I came into class, a student kept pointing at me and pointing at his own forehead. It was evident something was amiss, so, I straightened up my hair and went on with the lecture. After class, he came up to let me know that I must’ve been working on my car before class because I had grease on my forehead. I explained that it was ashes from Ash Wednesday. That didn’t help a lot because he never heard of Ash Wednesday or Lent, for that matter.

How do you explain “you are dust and unto dust you shall return” to someone who has no sense of eternity? We are called, as Christians, to witness to those around us. Sometimes it can be very difficult since common cultural understandings have been lost. It dawned on me to say to him, “We receive the ashes to reminds ourselves and all who see them that there is a God and I’m not Him.”

Scripture notes the words of doubting Thomas “unless I put my finger into the nail marks in his hand, and my hand into his side I will not believe.” The secular American culture seems to be the “doubting” Thomas in the modern age but without the humble sense of repentence. When Christ later appeared to the apostles huddled in the Cenacle, He said to Thomas “you have believed in me because you have seen me. Blessed are those who have not seen yet believed.” With deep humility, Thomas responded, “My Lord my God.”

The “Year of Faith” and “Fortnight for Freedom,” called for by Pope emeritus Benedict and the U.S. Catholics Bishops remind us of our duties to proclaim to a doubting neighbor, colleague, and even sadly, family member who is the Lord of all.

The worship of the scientific method has been the secular alternative religion to many agnostics and atheists.

Recently, in Bradford County, Florida, a monument was placed right next to an existing stone Ten Commandments monument near the county courthouse which stood in a “free expression zone.” The Washington Post, in reporting the ceremony, provided a photo of the 1500 pound marble tower and bench placed next to it with a symbol of scientific-atheist creed on it. American atheists had brought suit to have the Ten Commandments monument removed from the court house square but to no avail. The American Atheist group (from New Jersey) which paid for the monument was criticized by on lookers as being “outsiders” imposing their values on the Bradford Community. The bench included quotes from Jefferson, Franklin, and of course the first President of the American Atheists, Madelyn Murray O’Hair.

At one point, Eric Hovind, 35, of Pensacola, Fla., jumped atop the monument and shouted his thanks to the atheists for giving him a platform to declare that Jesus is real. Atheists shouted at him, and he stepped down after about a minute. How many of us would do likewise in the name of the Lord. Sad to say that when supporters of abortion in Texas can chant “Hail Satan” outside the Texas Legislature as it passed a law restricting abortion after 20 weeks, the need to evangelize the culture is likely to continue long after the Fortnight for Freedom and the Year of Faith.