What does a Papal Resignation Mean? 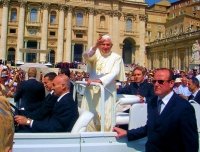 No doubt we all awoke to shock this morning. The Holy Father issued a statement today in Rome that has everyone’s wheels turning, and it is unprecedented in recent history. Can a pope really resign?

John Paul II, in his reorganization of the Roman Curia, took this possibility into account. If the pope himself feels that his capacities are waning, he can indeed step down. (If he fails to recognize it, there is a even procedure for the College of Cardinals to declare him unfit for duty.) This was seen as a novelty at the time, but the true import of this will be felt in full force over the next few weeks. (It has happened in the history of the Church, most recently with Gregory XII in 1415.)

We are also aware of how Blessed John Paul II lived out the last years of his pontificate, with somewhat diminished strength, but carrying the cross of suffering for the world to see.

Pope Benedict knows this well: “I am well aware that this ministry, due to its essential spiritual nature, must be carried out not only with words and deeds, but no less with prayer and suffering.”

And yet, he says those words which touch our heart: “However, in today’s world, subject to so many rapid changes and shaken by questions of deep relevance for the life of faith, in order to govern the bark of Saint Peter and proclaim the Gospel, both strength of mind and body are necessary, strength which in the last few months, has deteriorated in me to the extent that I have had to recognize my incapacity to adequately fulfill the ministry entrusted to me.”

For this reason, and well aware of the seriousness of this act, with full freedom I declare that I renounce the ministry of Bishop of Rome, Successor of Saint Peter, entrusted to me by the Cardinals on 19 April 2005, in such a way, that as from 28 February 2013, at 20:00 hours, the See of Rome, the See of Saint Peter, will be vacant and a Conclave to elect the new Supreme Pontiff will have to be convoked by those whose competence it is.”

What an act of humility and love of the Church to come to such a realization!

Amid wonder and sadness, we also have to be amazed at the leap of faith Pope Benedict is taking. He trusts the Holy Spirit’s guidance over the Church, and feels that God is leading Him to this. For him to leave mid Year of Faith would seem to be an indication that his health issues are serious.

There are still more questions than answers, more shock than peace in the Church today, but one thing is certain: there will be a new pope during the first week or weeks of March. In modern memory, Cardinals have never had three weeks’ notice before a conclave.

One more thing is certain. Whoever the next pope is, he will have a wise and faithful adviser the likes of which no other pope has ever seen.