What the Statues Say 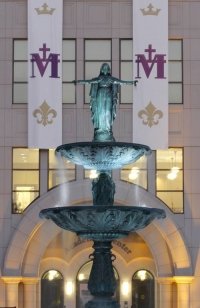 Symbols, signs, sacred images, and acts of faith shape and reshape our values, memory, and identity as a Catholic college.

Since the beginning of civilization, humankind has used symbols, pictorial and non-pictorial, to organize and condition how we think and act in the world. Symbols govern social experiences, cultural tastes and values, and our belief systems. Moreover, religious symbols help to amplify truths into a coherent system that is applied to life.

Nowhere is this more evident than the recent Marian consecration of Benedictine College to Jesus through Mary.

The act of consecration is not only symbolic; it demonstrates how shared memory informs our collective identity as a Catholic college.  Further, consecration can be looked at, from a secular perspective, as a ritual or rite charged with emotional efficacy.  In creating a shared collective memory through the use of symbols, a “totality” of sacred and aesthetic experiences is redefined for us.

Historically, there are a number of events leading up to the consecration that serve as a context for understanding how symbols are used to shape memory and collective identity. 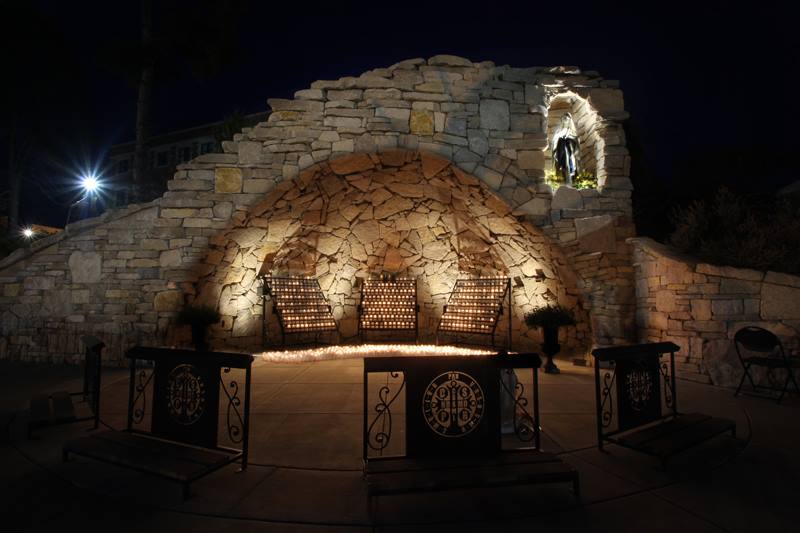 Take for example the construction of Mary’s Grotto in 2008, a project commemorating the 150th anniversary of the appearance of Our Lady in Lourdes, France, as well as the founding of the college by Benedictine monks. Today the grotto serves as an important focal point for life on campus. In addition, in 2012, the campus started the “Memorare Army,” a national movement of prayer calling upon the intercession of Mary in rejecting a government initiative to force health insurance providers to cover contraception.

At the same time, the college’s president, Stephen D. Minnis, has regularly led a rosary in the crypt of the Abbey for students, faculty and staff. Finally, as a part of the consecration, a fountain in the likeness of Mary, based on an earlier statue, was unveiled. All of these events use symbols — the stone grotto, an abundance of statuary dedicated to Mary, the Virgin of Guadalupe chapel in basement of the Abbey, the collective prayer of the Memorare Army, weekly rosaries, the addition of the fountain, and finally the consecration of the campus, signify the importance of establishing and maintaining the college’s unique Catholic identity through an association with Mary.

The connection between the college and the Blessed Mother Mary can be traced to stories about the founding of the Abbey in the 1850s. Moreover, the college’s present identity is rooted deeply in Benedictine tradition and the recollections of the first Benedictine monk to arrive in the Kansas Territory, Father Henry Lemke.

According to his diary, Lemke became lost wandering home in the wilderness when a thunderstorm overtook him. “I found myself standing there, surrounded by darkness, almost being swept away by the fast rising waters … So, I threw myself down on my knees in the grass and begged Mary, the Helper of Christians, to come to my aid.” Lemke attributes his survival to the intercession of the Virgin Mother. Through the rain and darkness, Lemke recounts seeing a light in a window from a cabin in the distance. Later, upon asking why the lamp was lit, the homeowner responded that her daughter had seen a lady dressed in white and had awakened her. Lemke uses symbols of the light and the lady in white as a way of creating a connection to the spiritual world.

In his diary Lemke wrote, “O, you dearest Mother of God, I thought to myself, you actually have heard my prayers!  It was through the pure and unsullied soul of a child that you effected something so that the mother would be aroused and would then place a lamp in the window just about the very time when I was calling out for help because I feared for my life.”

The consecration is symbolic because it enhances the importance of the faith-based campus. As the great University of Chicago historian Mircea Eliade put it, “The symbol, the myth, and the image are the very substance of the spiritual life  … they are ‘the path to truth … the making present of something absent — something that would remain absent and inaccessible without the symbols,”

Father Lemke’s interpretation of the encounter with the Lady in White establishes Benedictine College’s identity — it defines us spiritually, intellectually, and emotionally.