Writing from Left to Right 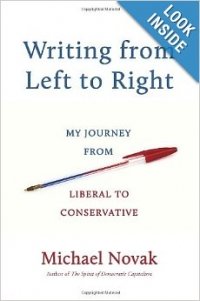 By Fr. Matthew Habiger, OSB | A moral theologian, former president of HLI and noted expert on Natural Family Planning, Fr. Habiger is a monk at St. Benedict’s Abbey in Atchison, Kansas. Contact him at mhabiger@kansasmonks.org

Michael Novak, in his recent Writing From Left to Right, gives us a lucid insight into the process that led him from being a “progressive” leftward leaning thinker to taking a more centrist position in his views on religion, politics, economics and culture.  Now 80 years of age, he reflects upon his intellectual journey since the 1960s, and explains the various experiences that moved him from being a liberal to a neo-conservative.  (He once defined a neo-con as a former liberal, mugged by reality.)  Anyone interested in how a former liberal found his safe haven in the basic core values of American Democracy (freedom, family, work and religion), will find this book very refreshing.  Perhaps this book is Novak’s effort to reach out to others who are disillusioned with ideologies that are not working very well today.

His intellectual journey is fascinating.  Both he and his younger brother, Dick, were members of the Holy Cross Congregation, preparing for the priesthood.  While completing his theological studies in Rome in 1960, he discerned that his true calling was that of a writer, theologian, philosopher and social commentator, and not the priesthood.  Major influences upon him at that time were Reinhold Niebuhr, Jacques Maritain, John Courtney Murray, S.J., and Henri de Lubac, S.J.  After Rome, He did graduate studies at Catholic University, then four years at Harvard, two in the philosophy department, and two in the new school of divinity.

He was commissioned to cover the second session of Vatican II, and he gave a daily record of events to many journals.  After the Council he wrote The Open Church, in which he criticized some conservative theologians for their  “unhistorical orthodoxy.”  He tried to find common ground between the “progressives” and the “conservatives,” by pointing to their different approaches to shared concerns.  In later years, people who rejected him for joining the American Enterprise Institute still gave their approval to The Open Church.

Novak was always in the thick of things.  He gave his opinions on the major events of the day, e.g., the Vietnam War, LBJ’s war on poverty, economic development in the Third World.  He worked out his positions in public by publishing them in journals and books.  This brought him to the attention of influential people, who wanted to draw upon his writing skills and his great influence upon university students.  He worked as a speechwriter on the campaigns of Robert Kennedy, Gene McCarthy, Sargent Shriver, and George McGovern.

During this period he began to question the assumptions of the Left, which emphasized such things as that big government can handle any problem, that equality means redistribution of wealth, that a government can spend its way out of a recession, and socialism is the wave of the future.  Novak had the credentials that the Left wanted.  He could have been one of their spokesmen, if he had remained loyal to their presuppositions.  But he was more interested in discovering how things actually were, what actually brought about peace and economic prosperity, rather than being accepted by any political camp.

He noted that the critics of the United States’ involvement in Vietnam paid little attention to what happened to the South Vietnamese when the Viet Cong took over the country.  A double standard was in effect.  He noted the “stagflation” (high unemployment and inflation) that resulted from President Jimmy Carter’s use of high income taxes and high capital gains taxes.  He was teaching at Stanford when Ronald Reagan was Governor of California, and closely observed the results of early Reaganomics.

In 1977 the AEI, a world-class think tank on economic and social thought in Washington, D.C., invited him to join its team of scholars.  He said he felt like a lucky graduate student soaking up learning from the stars above.  Recognizing the gap in his knowledge in economics, politics and sociology, he began to read extensively in these areas.  When you apply Catholic moral principles and reasoning to these disciplines you have Catholic Social Teaching.  Now Novak begins to articulate a defense of democratic capitalism, which has been so successful in raising the standard of living for millions of Americans, and for millions elsewhere throughout the world.  He notes that Mainland China observed what was happening in Taiwan, and then decided to duplicate it.  He noted that Russia has dumped socialism as a failed experiment, and has embraced its own version of capitalism.

He published his The Spirit of Democratic Capitalism in 1982, which was a very brave thing to do at that time.  The mood in intellectual circles was decidedly anti-capitalism and enamored with the alluring, but unfounded, appeals of socialism.  Others noticed, and were deeply impressed with his book.  Margaret Thatcher told Novak that she had underlined many sentences in her copy, and wrote many remarks in the margins.  Vaclav Havel had it translated into Czech and many of the new leaders formed study groups to digest it.  The same thing happened in Poland.  Pope John Paul had read it before writing his Centesimus Annus, commemorating the 100th anniversary of Rerum Novarum.  Novak proudly points to paragraph 42 of CA, which shows the clear influence of the three major principles of Democratic Capitalism.

Michael Novak has led a remarkable life, remarkable for all the influential people he has met and collaborated with, and remarkable for the keen insights and clear-headed writing he has offered since the 1960s.   He combines faith and reason.  Since faith is highly reasonable, he searches for the evidence in real life that supports the wisdom of solid principles.  In  terms of Catholic Social Teaching, he wants to show the reasonableness of the principles that underlie a just economic order, a just political order, a just social-cultural order, all of which bring about a just society.

Novak knows what it means to be criticized, even unfairly so.  But he is convinced that the way to deal with controversies and differences of opinion is to engage in thoughtful, respectful, discussion and argumentation.  One’s position must do justice to the evidence.  Truth, in its many aspects, can be known and put into practice for our benefit.  He encourages us to keep looking for the truth, to not ignore those who have been left behind, and to realize that we are all on the same spaceship, called Earth, where we are to learn how to live together in ordered liberty for the years allotted us.

After reading Writing from Left to Right: My Journey from Liberal to Conservative, you are motivated to read more of Novak’s earlier writings.