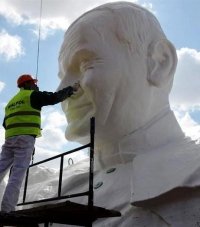 On April 27, shortly after his canonization, Benedictine College will rename its student union after Pope John Paul II.

It’s the latest in a number of commemorations of the great pope’s legacy.

On April 2, his death anniversary, enjoy these statues of John Paul II from around the world culled from Flickr’s Creative Commons.

They show the universal love Catholics have for the Polish pontiff.

Outside the beautiful cathedral he consecrated in 1993, Almudena Cathedral in Madrid, Spain. (Flickr photo by Barcex)

John Paul passes through the gates of the third millennium in this Wrzesnia, Poland, monument. (Flickr photo Andrew Tijou)[/caption]

A glass statuette of the Pope at Loreto, Italy. (Flickr Marvin PA)[/caption]

Izamal is a small city in Yucatan, Mexico, known as “The Yellow City.” John Paul II visited in 1993 and presented a crowned statue of the Blessed Virgin Mary. (Flickr photo by Adam Jones)

This seated John Paul II is at Przemyśl, Poland, near the Ukraine border. (Flickr photo by Radek Szuban) 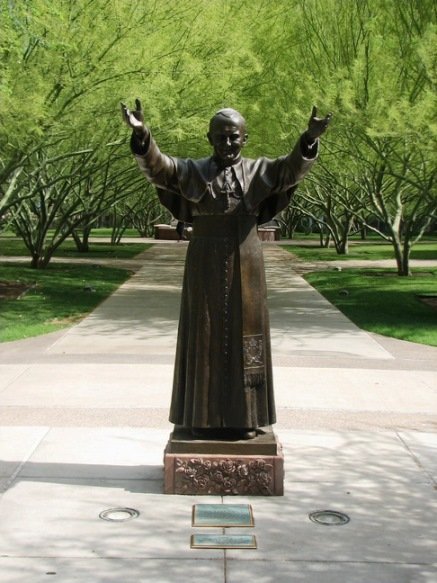 The dramatic statue of John Paul II stands in his beloved shrine of Our Lady of Fatima, Portugal (Flickr cactusbeetroot)

This statue of Pope John Paul II is in Mexico City’s Zocalo Plaza and is made entirely out of donated keys, symbolizing Peter’s successor. (Flickr photo by Aidan Wakely-Mulroney)