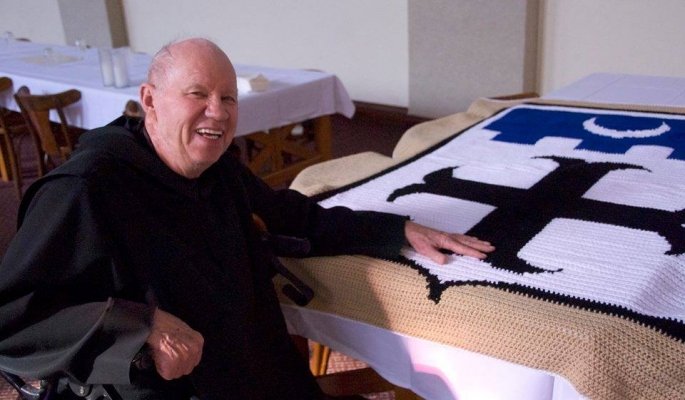 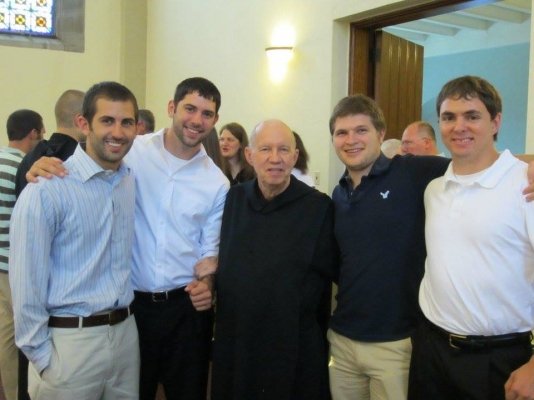 Father Bruce with students of Benedictine College, where he serves as confessor for years. 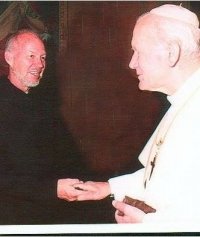 The reports went out over social media throughout the day.

“He was received into the arms of the Divine Child when he died this morning in the presence of our Lord and surrounded by the prayers of his brothers,” posted St. Benedict’s Abbey.

Fr. Meinrad Miller, OSB, wrote that “Over many years of faithful service as monk and priest, he faithfully brought the mercy of the newborn Jesus to countless hearts in Confession, Mass, and Spiritual Direction, and now we entrust his soul to the care of Christ, whose Birth brings the Father’s mercy anew into our world.”

Brother Benedict Geist wrote a heartfelt remembrance of Father Swift on his Facebook.

“My heart is very heavy today because my beloved confessor and spiritual director Fr. Bruce Swift, OSB died unexpectedly while moving from his early morning holy hour to the choir stalls for morning prayer.

“Words cannot describe how much this man means to me. He was a faithful and dedicated priest who always, no matter what obstacles stood in his way (even broken ribs), would make it down to the church to hear confessions for an hour a day and be there to concelebrate Mass”

He described moments of darkness that the priest helped him through, his inspiring prison ministry and his good humor.

“He encouraged me in my faith life and encouraged me in my Marian devotion — he even invested me with the five-fold scapular which I still wear today. It was also him that gave his approval, support, and encouragement when I decided to enter the monastery,” wrote Brother Benedict, who made his first profession Dec. 8.  “He was a father to me away from home.”

In closing, he wrote: “God bless you Fr. Bruce. I will pray for you, but I know I don’t need to ask you to pray for me. You’ve never stopped.”

The Abbey invites well-wishers to join them as they commend Fr. Bruce to God: