A Scripture Scholar, a Great Books Guy, a Campus Minister and an Engineer Walk Into Noah … 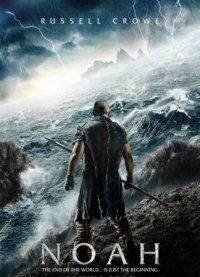 I saw Noah last night with two Benedictine College professors  — a Scripture Scholar and a Mechanical Engineer — our Director of College Ministry and a Great Books Guy from Kansas University.

The Campus Minister and the Great Books Guy hated it, the Scripture Scholar had mixed feelings and the Engineer and I kind of liked it.

Over a beer afterwards …

And me? I got the haters to agree that it wasn’t a “look at your watch” kind of movie.

This Noah gets God right — he exists and is fundamental to everything. His will matters, but he is mysterious and we need to be reverent and attentive to hear him, precisely because he is so fundamental (it is similarly difficult to study air).

Noah gets man right. We suffer from original sin and are at our best when we seek out and do God’s will which we slowly learn is love.

The movie’s special effects were disappointing to me — I never bought the landscape or the flood. The movie will soon feel dated; it already kind of did.

The movie’s Shem was disappointing to me — Noah’s son was an antediluvian Millennial, more a product of the hookup culture than of a righteous prophet, and he couldn’t even defend his woman properly.

And the animals were disappointing — they basically board the ark and are out of the picture. But the animals are one of the reasons you see a Noah movie, from an entertainment perspective.

In the end, I can see why Noah has provoked such wildly different reactions.

But if you have $7.50 of discretionary income, there are worse things you can spend it on. Just be sure to bring along a Scripture Scholar, a Campus Minister, a Great Books Guy and an Engineer and sit them down afterwards to discuss it.