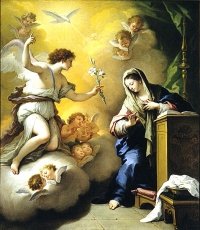 The Supreme Court will hear arguments today in the case of Sebelius vs. Hobby-Lobby, which will prove to be a watershed case for religious liberty.  What many fear is that the Court will grant the government authority the Constitution does not, creating something from nothing by judicial fiat.

The twenty-fifth of March is a day with a rather long history of fiats, but not exactly the type activist judges normally have in mind.

A long and rather strange tradition marks March 25th as the first day of creation. That’s right, the universe began in the middle of a month, giving the world fifty-one weeks to get ready for St. Patrick’s Day. The tradition, which was never fully adopted in the Western Church, used an Anno Mundi (in the year of the world) rather than an Anno Domini (in the year of Our Lord) calendar. It was the first day of the year in the medieval  Julian Calendar, where March 25th marked the vernal equinox and beginning of spring..

It sounds crazy, and yet it seems logical that, if you were going to create a world, you’d start right at the beginning of spring and not in the middle of winter. What the tradition underscores is the newness of life, a “freshness deep down things,” in Hopkins’ happy phrase, the goodness of God overflowing in the wonder of his creation.

Fiat, “let it be done,” “let it be made.” How awesome a power that can create such beauty from nothing;  how generous and loving a God that invites the universe to share in his glorious fulfillment!

But today’s Solemnity of the Annunciation speaks of another creation. The creation of the Human Nature of the Word, that very Word who uttered the fiat of creation, in Whom all things came into being and without Whom there came into being not a single one.  The Author of the Universe becomes a single-celled organism…

But what boggles my mind is that the God who sculpted the Himalayas with snowflakes asked permission of his creature in order to become incarnate. To be born of a woman, He showed Himself a gentleman. And Mary’s fiat (“Let it be done unto me according to your Word”) is an echo of the fiat of creation, but one of absolute obedience, not absolute power.

Only a fiat that echoes the Creator’s is truly judicial. To contradict the order established by God is to err in judgment. To establish a right in law that does not exist in reality is opposed to the very definition of law as an “ordering of reason…” since it is unreasonable to say that something is there when it is not.

God created man to find fulfillment in God. When man sinned and fell, God restored man by becoming incarnate, asking a maiden’s permission to do so. And God wants each person to seek and find Him by using his God-given faculties. This is the basis of religious freedom, and this is why it cannot be constrained.  To deny this freedom is to misunderstand the very notion of man.

As we celebrate the Solemnity of the Annunciation, let us place our country under Our Lady’s powerful intercession.  It is her example of openness to God’s will that teaches us what a truly judicial fiat is, and where the pathway is to true and fulfilling freedom.