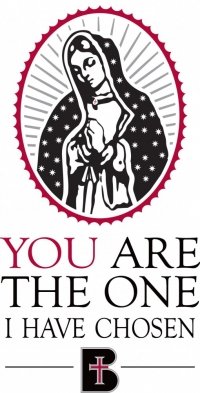 As we celebrate St. Maximilian Kolbe and the Feast of the Assumption a year after Benedictine College was consecrated to the Blessed Virgin Mary, Marian devotion continues to flower on campus. Here are some examples from the coming school year. (Click here to watch our new 2-minute video: The Church Looks to Benedictine College.)

Residence Halls. The 10th and 11th new dorms we have opened since 2000, Lemke Hall and Our Lady of Guadalupe Hall, will be ready this fall. The latter is dedicated to the Star of the New Evangelization. Each room will feature a different Marian title.

Convocation. the school year will open with the March of Light in which freshmen place a candle at Mary’s Grotto. Bishop Andrew Cozzens will celebrate the opening School Mass before the convocation, which will feature business author Patrick Lencioni as the keynote speaker. Last fall Bishop Cozzens, class of 1993, became the seventh Raven bishop in the 21st Century.

Clock Tower. The new signature tower that the school dedicated to St. John XXIII will now be a clock tower, with four-foot clocks facing each direction, and will play the fight song and Marian hymns.

Mary Garden. Benedictine College will install a new park in the center of campus featuring a fountain and plants and flowers named for devotion to the Blessed Mother.

Individual consecration. Following a visit by Father Michael Gaitley, hundreds of Benedictine College students consecrated themselves to the Blessed Mother.

President’s Rosary. The President and Dean lead a rosary every Wednesday morning on campus.

“Our new school year’s theme emphasizes that Benedictine College is a chosen place with a special mission,” said President Stephen D. Minnis. “It is our hope that students will see in Our Lady’s words to Juan Diego the call to each of them to the tasks of the New Evangelization.”

Benedictine College in Fall 2014 will open two new residence halls — the 10th and 11th new dorms on campus since 2000. One is named Guadalupe Hall and the other is named Lemke Hall after Father Henry Lemke, a founder of St. Benedict’s Abbey in Atchison.

Minnis said Benedictine College students have a special relationship to the Blessed Mother.

“We receive many applications and that as I sign the letters of those who have been accepted I pray a Hail Mary for that specific person asking Mary’s intercession in their lives,” he said. “It is through the grace of Our Lady that they are at Benedictine College. There are many she could send to Benedictine, but it is the ones attending the college that she has chosen for the task.”

In the 1999 document Ecclesia in America (The Church in America) St. John Paul II named Our Lady of Guadalupe “Patroness of all America and Star of the first and new evangelization.”

Our Lady of Guadalupe is a cherished devotion at Benedictine College. Students have used the Guadalupe Chapel on campus, in the crypt of St. Benedict’s Abbey, since the 1950s. In 2013 and 2014, Benedictine College  was one of a few Catholic colleges in the United States to be chosen to participate in the Vatican’s Ecclesia in America conference, which focused on Our Lady of Guadalupe.

“When we were looking for a theme for the school year, we came across the words of Our Lady of Guadalupe and immediately knew we found it,” said David Trotter, Director of Mission and Ministry. “We know these words will be the perfect tie-in as we form young men and women to answer Christ’s call to bring his Gospel into every sector of society.”

Our Lady of Guadalupe appeared to Juan Diego in Mexico in December 1531. To confirm the authenticity of her appearance , she led him to roses that had bloomed in the winter and caused her image to appear on his tilma (cloak). The miraculous image brought about a sea change in Mexico, attracting millions to the Catholic faith. Despite the age of the tilma, the image has survived to the present day.