Catholics Should Be Monuments Men 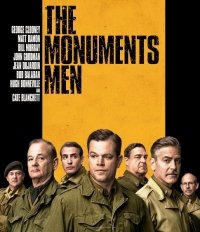 A new movie in theaters tells the story of men who were willing to die for beauty. Catholics should ask if we are willing to do the same.

In one scene in The Monuments Men, Donald Jeffries enters the Catholic cathedral in Bruges, Belgium, in order to protect Michelangelo’s Madonna and Child from the Nazis who want to destroy it.

As he is helping the priests barricade the door, one asks if he is Catholic.

He replies, “Tonight I am.”

His love of this piece of art means that he will put aside his presumed ties to the Church of England and give his life — because this statue touches him so deeply. The Nazis disregard this sacrifice — yet, for Jeffries, it returns his dignity. And his sacrifice gives the rest of the men vision and purpose for what seems to be a fruitless mission.

The movie tells the story of a group of men all out of place on the front lines of war who are assembled in order to search for and protect the master works of European cultures. The Nazis understand that these works and love for them transcends the culture of their creators. In order to break down culture, the Nazis must remove these works from human knowledge.

By the time the men are collected and embark for Europe, many works have already been taken, many buildings have been bombed, and many men have already died. Preserving artworks is the least of the generals’ worries. They want to lose as few men as possible while finishing the war quickly. These generals see the costs of the war in numbers of lives lost, not amount of culture destroyed.

The monuments men know that without culture to fight for, these lost lives are futile. Boys may go off to war to kill the other side, but men continue to fight to protect their way of life, to protect the intangible. They lose their lives because they believe in the value of culture.

Culture exists to be respected and appreciated by outsiders as well as to be worn as a badge of honor by those who uphold it. The artworks Hitler has collected are to be hidden or destroyed so the men fighting will forget. Yet it is these works of art that keep the men fighting.

One of the soldiers that supports the monuments men is a young Jewish man who fled Germany when Hitler came to power. He remembers a self-portrait of Rembrandt displayed in the museum where his grandfather worked that he was never allowed to see.

It is for works of art such as these that he fights for the right to see. He finally is able to view the work down in a mine where the Nazis had hidden it. Viewing this work he had heard about but never seen reminds him of what it is he is fighting to save.

These men are fighting to save the beautiful masterpieces of Europe. The Catholic Church today is fighting to save the truth of human beauty. Humans have forgotten that they are created in the image and likeness of God. We are the ultimate masterpiece. The Monuments Men is a reminder that preservation of humanity extends to many aspects beyond the political, and therefore it will take all kinds in order to renew our humanity.

sacred art, theology of the body