Benedictine College in Atchison, Kan., held its 43rd Annual Commencement Exercises on Saturday, May 17, 2014, in the Ralph Nolan Gymnasium on the Atchison campus. (For photos of the events, click here.)

This year, 212 candidates received their undergraduate degrees. Preceding the ceremony on Friday, May 16, were the Nurse’s Pinning Ceremony, the Engineering School reception, and the Baccalaureate Mass, which was held in St. Benedict’s Abbey Church and featured Archbishop Joseph Naumann of the Archdiocese of Kansas City in Kansas as celebrant and homilist.

Alvaré is a Professor of Law at George Mason University School of Law, where she teaches Family Law, Law and Religion, and Property Law. She publishes on matters concerning marriage, parenting, non-marital households, abortion and the First Amendment religion clauses. She is faculty advisor to the law school’s Civil Rights Law Journal, chair of the Task Force on Conscience Protection of the Witherspoon Institute (Princeton, New Jersey), president of the Chiaroscuro Institute (New York, New York), chair of the Catholic Women’s Forum, a consultor for the Pontifical Council of the Laity (Vatican City), an advisor to the U.S. Conference of Catholic Bishops (Washington, D.C.), and an ABC news consultant. She cooperates with the Permanent Observer Mission of the Holy See to the United Nations as a speaker and a delegate to various United Nations conferences concerning women and the family.

She and Dr. Paul Camarata, associate professor and chairman of the Department of Neurosurgery at the University of Kansas School of Medicine in Kansas City, Kan., received Honorary Doctor of Humane Letters degrees.

She shared a story about spending time with Pope Francis.

“About two weeks ago in Rome I met with a man who work with the press on behalf of Pope Francis. He is not an inexperienced guy. He has covered some of the hot spots in the world, for leading press, and for decades. Telling me about something the Pope said to one of the thousands of pilgrims cheering him on in St. Peter’s square, this sophisticated man got choked up.  It turns out that one pilgrim called out to the Pope ‘you are one of a kind,’ and the Pope stopped and turned on his heel, replying immediately to this man ‘But you, you are one of a kind too!’

Expanding on the story, Alvaré reminded the graduates that their gifts and talent should be put to use in the service of others.

“So if I can help move you one inch further or five minutes faster toward grasping what your parents and grandparents already understand, that your gifts and capacities are for giving, that then you’re really living, then you’re free and happy, I will have served you well,” she said.

In regard to her experiences in debating and even defending Catholic teachings about respect for life, women, marriage and religious freedom, she gave the graduates some advice on how to make the case.

“I think we are most persuasive regarding religious freedom when we are manifestly the kind of people, the kind of religious community, whose ideas and behaviors are what society WANTS more of,” Alvaré said.

“When we demonstrate real love, real solidarity with other human beings, compassion for the suffering, an option for the poor, and a continual search for truth…when we, as Pope Francis says, have dirt on our shoes because we have gone to the outskirts to care for other people…when our church, that is you and me, is manifestly a field hospital on the front lines of the suffering of the world, then when we assert that we, and other religious actors, require the full measure of religious freedom, our argument on this matter is immeasurably strengthened.”

“We should never shirk, in other words, from talking about, from manifesting, what our religious freedom is FOR, how this freedom benefits all of society, versus simply demanding our bare constitutional and statutory rights,” she concluded. 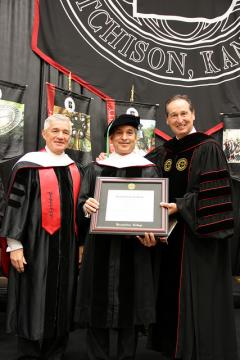 Dr. Camarata is the chair of the department of neurosurgery at the University of Kansas Medical School. He is a 1986 graduate of that school. His undergraduate degree (in biology and Italian) is from Stanford University. Dr. Camarata has received many professional honors, including being named the best neurosurgeon in Kansas City by the Kansas City Business Journal, and several recognitions from regional and national “top doctor” awarding agencies, being recognized both by patient and by fellow physician nominations.

In addition to his medical career, Dr. Camarata is a member of the board of the Star Quest Production Network, a Catholic media organization which produces a variety of audio and video podcasts. Designed to further the new evangelization, SQPN seeks to employ the tools of modern technology to bring the witness of the Church to contemporary society.

Dr. Camarata himself produces and hosts “Saint Cast”, a popular series of podcasts which delve into the lives and times of both well-known and obscure saints. He is a leader both in the Archdiocese and within the Catholic media community. Dr. Camarata combines professional excellence, a dedication to advancing knowledge, and an ongoing witness to the Catholic faith.

The program included an address from the class valedictorian, Emily Rose Carter of David City, Neb. Carter graduated with a perfect 4.0 GPA with degrees in Spanish and International Studies. She offered some memories, words of hope and a prayer for her classmates.

“Fellow graduates, I hope that wherever your paths go from here, you meet with success and hold fast to the values that this institution is founded upon,” she said.

During the ceremony, Benedictine College President Stephen D. Minnis recognized two student leaders with the Fran Jabara Leadership Award. The annual award recognizes graduating seniors who display exemplary leadership skills and is given to specially selected seniors at all private Kansas colleges. The honor indicates the high level of ability the recipients have displayed as well as the respect with which their peers and teachers view them.

The two honorees this year were Michela Brooks and Ryan Boh. Brooks was an outstanding resident assistant in the Office of Student Life and was one of the premiere tour guides for the Office of Admission. She will be a missionary for the St. Paul’s Outreach program in the Kansas City area. Boh was also a notable resident assistant and was the student responsible for starting lacrosse on the Benedictine campus. He was a leader in the Enactus program in the School of Business and was a Koch Research Fellow.

“These young men and women will be going to seminary or choosing the religious life with an order of sisters,” Minnis said. “We are proud of them and their service to the Church.”

Their fellow graduates and families gave these students a standing ovation.