Connecting the Dots From Peter’s Galilee to Francis’ Rome 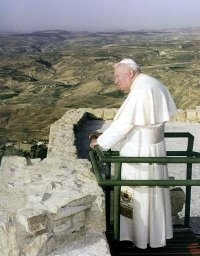 I consider myself particularly blessed because I was there when the soon-to-be-saint Pope John Paul II visited the Holy Land.

I vividly remember his homily at the Mount of the Beatitudes when he said that Jesus “does not say simply, ‘Do what I say.’ He says, ‘Come, follow me!’” and he added, “You hear his voice on this hill.”

Imagine reading about Lewis and Clark’s epic expedition without having any idea of what the Missouri river looks like, or how long it takes to go from St. Louis to Seattle, and what it means to spend a winter in North Dakota.

This is more or less our situation when we listen to the accounts of the Passion during the Holy Week if we haven’t visited the Holy Land. Those mysterious places referenced in the Gospel accounts – Bethany, the Mount of Olives, the Gethsemane, the praetorium, Caiaphas’ house, Golgotha, to mention a few — sound like scenes of a theater play rather than real places.

At least, that was my situation until I went to the Holy Land on a pilgrimage.

It was in the early ’90s, and a few years later I had the chance to live in Israel for 10 years. Those places mentioned in the Gospel became familiar to me, but never to the point that I could say, “I know it all,” or, “I understood it all.”

However, at least when the Gospel reading says “go and tell the brethren to go to Galilee, and there they will see me,” I now know how distant the Galilee is from Jerusalem, and what it looks like — what Galilee meant to the apostles.

Is this important? It is surely not essential. We can live and grow in our faith without ever going to see the places where Jesus lived. But important to me? Definitely. Yes. It is part of my journey toward a deeper understanding of and affection for the mystery of our salvation, for my Savior Jesus Christ.

This is why we have pilgrimages: since the early Church people felt the need to hit the road and trudge mile after mile toward places where the Mystery had touched humanity, be it through a saint, or a Marian apparition, or Jesus himself. Along the way the pilgrim undergoes a slow process of transformation that opens him or her up to the encounter with God’s grace and the possibility of a new life (the movie The Way depicts this process very well).

The pilgrimage to the Holy Land is a sort of long-term investment. While visiting the holy sites you do not have to expect sudden revelations or emotional raptures. You are there to observe, listen, absorb, and beg. The moment will come when suddenly the dots connect.

On May 19 through 27, for the fifth time, Fr. Brendan and I will lead a group from Benedictine to the Holy Land.

We will go there in the footsteps of the countless pilgrims who have preceded us since the first centuries of the Christian era.

“This great tradition,” as Pope Benedict XVI pointed out when he visited the Holy Land in 2009, “is grounded in the desire to see, to touch, and to savor in prayer and contemplation the places blessed by the physical presence of our Savior, his Blessed Mother, the apostles and the first disciples who saw him risen from the dead.”

In the time we will be in Israel, the Holy Father Pope Francis will also visit the Holy Land, and we hope to be able to attend a Mass presided by him in Bethlehem. This is an incredible and unplanned gift, after John Paul II, I will be once again in the Holy Land with a Pope!

This great opportunity prompts me to recall a recent experience of “connecting the dots,” involving the Pope, St. Peter, Galilee, and us.

Last February I was in Rome with the group of Benedictine College students who were starting their semester in Italy with a week-long visit of the Eternal City.

The week our students spend in Rome includes a visit to the tomb of St. Peter. The tour is also known as the Scavi tour, “scavi” being the Italian word for “excavations.” In fact, even if it was well known that the Basilica of St. Peter was built where the Prince of the Apostles was buried, it was not until the 1940s, during the Second World War  that the place was dug up to find out if St. Peter’s remains were actually there.

The story is not actually that simple, as it was complicated by some glitches that made the finding of St. Peter’s bones a sort of archeological drama. The guide was telling us about this fascinating story while leading us through the Roman necropolis, now completely underground, where the St. Peter was laid to rest after being crucified upside down in the adjoining Roman circus.

At a certain point we got to a room where our guide directed our attention to a few bones in a display case. They were lying in what was the tomb that contained them for almost two thousand years. We were given a few minutes to stay in silence and pray in front of what remained of St. Peter’s physical body.

And there I happened to have one of those moments in which two dots suddenly connect.

Fourteen hundred miles away from Rome, in a bright, green, warm spot on the shore of the Sea of Galilee there is a site now called the Primacy of Peter, in an area known as Tabgha, from a Greek word meaning “seven springs.” Jesus spent a lot of time in this place, rich in fresh water and vegetation.

In that small area he multiplied the loaves and fishes, he proclaimed the Beatitudes, he preached to the crowds who were following him.  And in a particular morning after his resurrection he appeared there to the disciples.

You know the story; Peter went out fishing with a few other disciples, but without catching anything. Jesus from the shore told them to cast the nets once more, and they got plenty of fish. Then he cooked breakfast for them, and after that, he talked to Peter, probably the first time after Peter denied Him. Jesus, on the shore of the sea asked Peter three times if he loved him. He didn’t rebuke him, all what he asked Peter was to recognize his love for Him as prevailing over even his shame for having denied him.

At that point Jesus told Peter what he had to expect. It was not a punishment, but a sort of strange promise. “Truly, truly, I say to you, when you were young, you fastened your own belt and walked where you would; but when you are old, you will stretch out your hands, and another will fasten your belt for you and carry you where you do not wish to go. This he said to show by what death he was to glorify God” (Jn 21:18-19).

Now, you have to imagine the place. The Sea of Galilee is actually a lake, located at 700 feet below the sea level, situation that creates a sort of tropical microclimate, made of a lot of sunshine, a nice warm breeze, gurgling streams, chirping birds.

In the darkness of the Roman necropolis I called to mind Jesus’ words to Peter while looking at his bones and I was wondering: how could Peter choose his martyrdom instead of the fisherman’s life on the shore of that lovely lake? What did he gain? That relationship with Jesus had to be worth hundreds of those lives as a happy-go-lucky fisherman.

He must have had inscribed in his heart what Jesus said in another occasion, “And everyone who has left houses or brothers or sisters or father or mother or children or lands, for my name’s sake, will receive a hundredfold, and inherit eternal life” (Matthew 19:29). At that point the guide invited us to move on and from the dark necropolis we headed out into St. Peter’s square. And here we go.

This magnificent basilica, the superb Bernini’s piazza, the Benedictine College students who were with me, the crowd of pilgrims from all over the world, myself, all of us, the living Church paying homage to this fisherman, we were just a little speck of this hundredfold unfolding through the centuries and the millennia. That promise has been fulfilled! I don’t have to be afraid to lose anything, I can say, “Yes, Lord, you know everything, you know that I love you.”

The Pope, now Pope Francis, can repeat the words of the angel at the empty tomb: “do not be afraid”, “do not fear”, “go to Galilee”, as he did on the Easter Vigil, because he is the living testimony that God fulfills his promises.

And this weekend at the canonization of Pope John XXIII and Pope John Paul II we will see two Peters who also received the hundredfold.