Corpus Christi: Taking the Body of Christ to the Streets in 21st Century America 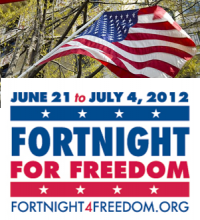 The “Fortnight of Freedom” has begun. Each year for the last three years, the U.S. Conference of Bishops has encouraged us to pray for the right of Catholics and people of all faiths to not just worship in their churches but to practice what is preached to them in their parishes and schools.

At the center of our Catholic faith is the Most Holy Eucharist. It is a precious gift for us to adore and where possible to share with others. Since the Eucharist is at the very essence of what it is to be a Catholic, wouldn’t Evangelization mean taking it (him) to the streets?

Catholics participating in the Holy Sacrifice of the Mass are reminded each day when the walk forward to receive Holy Communion that what they receive is “The Body of Christ.” The recipients are to reply Amen which effectively means “Yes, I believe.” Have you noticed at Mass when reciting the Creed, we no longer say “We believe,” but “I believe, I profess (not just acknowledge) and I “look forward” to the Resurrection… from this temporary earthly home to our “eternal home.”

Traditionally, Catholics have celebrated Corpus Christi Sunday (now referred to as the Solemnity of the Body and Blood of Jesus) around the beginning of the summer. How fortuitous that it comes when the weather is warm. We can throw open the doors of our churches and make the Lord visibly present to the people on city streets around the country.  The last three occupants of the Chair of St. Peter have consistently challenged us to “Go forth and live what we celebrate.” In the past, local Eucharistic processions on Corpus Christi Sunday were along the lines of the Eucharistic processions which Tom Hoopes so beautifully examined in his piece for this blog posted on Saturday titled, “Salvation History is a Eucharistic Procession.”

If we truly confess the salvation promised to us by our Divine Savior when he instituted the Eucharist, we should express our “thanksgiving” by sharing the Eucharistic Miracle with our friends and neighbors who either do not know Jesus or do not know of or recognize his “Real Presence” in the Eucharist.

Sadly the “Wall of Separation between Church and state” has been vehemently advanced by agnostics, atheists, and secularists who have been plying their trade in Federal Courts at least since the Everson School busses case in the 1940s. Court decisions, media coverage and confused bureaucrats have convinced too many Catholics that we cannot proclaim our Eucharistic Lord because doing so might “offend” some people or be threatened, bullied and otherwise intimidated by “Our uncle who art in Washington.”

The recent IRS scandals provide a new set of cautionary tales about expressing ourselves in the public square and being subjected to intimidating letters and worse still, sudden audits. Have you kept your federal tax records for the last 7 years? How ironic that the protections of religion from unlawful interference by the state, has become separation aimed at protecting the state from the actions of religious people. Alice, it might seem, has returned to Wonderland where everything is upside down.

A number of years ago, a friend of ours who was a Catholic Youth Minister in another state contacted me about a Eucharistic procession he was planning to be organized for local Catholic young people on the feast of Corpus Christi.  The previous year they held the procession around the church parking lot fearful of violating the law by trying to even use the sidewalks which surrounded the church. He knew that I had taught Constitutional Law and written quite a bit on it and figured I could describe whether even marching in the parking lot this year would also be a violation of the “separation of church and state in the first amendment.”

He really needed to read the first amendment which includes no such language as a “wall of separation.” The courts have found it there despite the fact that the founders rejected it.

It was a pleasure to inform him that he could and should plan to take the procession to the streets if he wished. Of course that would mean applying for appropriate permits from public officials responsible for public safety, just like anyone else planning a parade. He seemed shocked to think such things could be permitted. The law, I informed him, was clearly on his side. There is an old Will Rogers attributed saw that claimed that “It ain’t what people don’t know that is a problem, but what they do know that ain’t true.” How could there be a March for Life or prayer on the sidewalk outside an abortion clinic if religious people did not have a right to pray on the sidewalks?

Those who view religion as an imposition fight it tooth by jowl in every court in the land, must intuitively recognize the power of grace even if they do not fully comprehend it. To them, the less Catholics are able reverently evangelize the better.

My mind returns to the Rosary Rally at Kaufmann Stadium where people of many national origins dressed in their native garments and prayed in the presence of thousands upon thousands in the blistering KC heat. Bishop Finn and Archbishop Naumann, representing both the Diocese of Kansas City-St. Joseph in Missouri and the Archdiocese of Kansas City in Kansas, officiated over a beautiful ceremony which included Eucharistic adoration. Kaufmann stadium was a public venue.

One of my most uplifting memories as a Catholic involved participating in a Corpus Christi procession down Broadway with a “rolling rosary.” The procession stretched at least three long city blocks and since there were no bull horns being used out of reverence for the Eucharist, small groups were saying the rosary aloud. People were singing “Santo, Santo, Santo,” to the music of a Mariachi band in full regalia and others were decked out in costumes represented individual cultures from Asia, Africa, and Latin America among others.

What was even more remarkable was to see the people young and old and some tattooed and with bejeweled ears and some with hair of various Koolaid shades, standing heads bowed and often falling to their knees in the presence of the Lord of all nations. What a tool of evangelizing the culture.

Recent attempts to mute religious expression through the Affordable Care Act have demonstrated the extent to which some will go to religiously press their secular agenda. The Fortnight for Freedom represents an opportunity to prayerfully consider the ways in which we, as Catholics, can, by the grace of the Holy Spirit, bring Christ to the Public Square despite howling protestations of people who are “offended” by even the mention of God.

Pray that elected public officials will recognize that the pendulum, on religion’s role and first amendment liberty has swung too far to the left. With the Lord’s grace, the voting public will express a belief to their elected officials that faith has a major, and even a pivotal role to play at this critical juncture in American culture and politics.