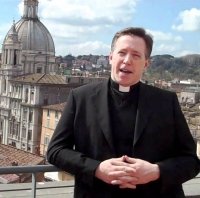 Last Fall Father John Wauck spoke to the Gregorian Fellows at Benedictine College about Pope Francis, the communicator. Now he is offering a week-long seminar in Rome for journalists, “The Church Up Close: Covering Catholicism in the Age of Francis,” organized by the School of Church Communications at the Pontifical University of the Holy Cross, Sept. 8-14.

I first met Father John in Washington, D.C., when he was a speechwriter for U.S. Attorney General William Bar and followed his career ever since. A native of Chicago, he graduated from Harvard. He has lived in Rome for the past 10 years and was featured in stories examining Opus Dei with regard to the Da Vinci Code, but his day job is teaching literature. In his life before becoming a priest, he was editor of The Human Life Review, and was a speechwriter also for then Gov. Robert P. Casey of Pennsylvania.

John Allen Jr. once said of many reporters covering the Church, “This would be like sending me to cover football.” What are the worst gaffes you have seen from journalists?

A particularly amusing case involved a very sophisticated, experienced reporter from one of the most prestigious newspapers in the world, who, in an article, wrote about “a crow’s ear,” when the object in question was a bishop’s “crozier.” To me, what’s most significant about that isn’t the journalist’s unfamiliarity with a small point of ecclesiastical culture; it’s the fact that no one else at the paper — and we’re talking about highly cultured people — caught the error. No bells went off in the back of anyone’s mind.

I recall being taken aback, at one of our Church Up Close seminars, by the surprise of a journalist (a extremely well-educated religion journalist, as a matter of fact) when he realized that Catholics believe that the Church was founded by Jesus Christ himself. It’s a very basic and, perhaps for some, obvious point, and it really changes one’s entire approach to the Church and its affairs.

I think many reporters who have to write about the Church are well aware that they are not experts. That’s one of the reasons why our Church Up Close seminars have been so well received.

What effect has Pope Francis had on news coverage?

Right now, one of the most compelling — and most popular — figures on the world stage is Pope Francis, the successor of St. Peter. This may come as a surprise to many. A former Rome correspondent of the New York Times recently made this remarkable admission.

On my vague mental list of things that might someday come back into fashion, the papacy was never present. I used to cover it for The Times, from 2002 to 2004, and was convinced then that my beat wasn’t just a dying man — John Paul could barely walk and struggled to talk — but a dying institution, at least in the United States and much of Europe. But the bevy of bulletins from Rome and the merry nature of so many of them suggest that people everywhere, even in the more godless precincts of the Western world, can’t get enough of this new pope and are committed to giving him the benefit of the doubt.

There’s no question that we are living through a fascinating moment in the life of the Church and its relationship with modern culture. And the best papers and journalists want to get up to speed. Increasingly, I think, it’s becoming apparent that, as a news story, religion is not receding.

The Church is not fading away. I think that something that comes through very clearly for journalists who have spent some time in Rome is the truly “catholic” or universal character of the Church. Going to an audience with the pope and witnessing the enthusiasm of tens of thousands of people from every corner or the globe is always an eye-opening experience. Obviously, one knows in theory that there are Catholics from very diverse cultures, but it’s another thing to hear, see and touch in St. Peter’s Square in the presence of Peter’s successor.

What stories have been most affected by the lack of knowledgeable religion reporting?

I think that coverage of the sex abuse crisis, which was obviously an important story that merited intense coverage, was sometimes marred by many journalists’ unfamiliarity with the Church.

Certainly, the questions of canon law and ecclesiastical jurisdiction were challenging for even well-prepared journalists to cover. The sheer size of the Church also presents a challenge for putting stories in perspective. For instance, the Church in the United States, where there are 78 million Catholics, is larger than the total population of any European country — except Germany and Russia.

It dwarfs the next largest Protestant denomination, to say nothing of the various Jewish and Islamic communities. Something similar could be said about the institutional longevity of the Church — the existence of a readily-identifiable unbroken chain of authority, with the attendant burden of responsibility, over the course not just of decades but of centuries.

These are questions largely of perspective. Then there are issues of doctrine and morality, which often tend to be treated from a secular political point of view, as if they were merely questions of policy, when in reality they touch upon fundamental issues like the nature of the Church and revelation.

What success have you seen in your work with journalists?

Our Church Up Close seminar offers journalists from around the globe a chance to get to know the Church in Rome personally. Another quite specific benefit that the journalists receive are contacts. While they’re participating in the seminar, they meet people — often otherwise hard to approach — who can help them with future articles and perhaps, in some cases, serves as sources.

The seminar in September, which we do every other year, is really an outgrowth of a monthly seminar that we do at the university in Italian for Rome-based vaticanisti. That monthly seminar was so successful that we decided we ought to offer it in English for journalists who have to cover the Catholic Church but don’t have the luxury of living in Rome. To facilitate things, we also compressed it into one week.

So, it’s basically a high-level crash course on the Catholic Church as seen from Rome. Along with specific contacts, the journalists get a better sense of who’s who and how things work at the Vatican, and I think that, for most the participants, their historical and cultural perspective on the Church is broadened, both by the various speakers and by international group of journalists with whom they spend the week. They learn a lot from each other.