Dealing with Nuns, Obama is no Jefferson 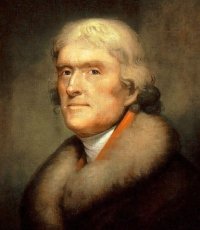 By John Traffas | Mr. Traffas holds an MA in Theology and is about to retire as a US Mail carrier in Atchison, Kansas, where he is actively involved in Benedictine College’s Plato Reading Group.

When the old Blessed Sacrament School/Bronx valedictorian Sonia Sotomayor issued a stay on New Year’s Eve to prevent the application of the Affordable Care Act’s contraception / abortifacient / sterilization provisions to the Little Sisters of the Poor in Colorado, many readers of the story might have thought the associate justice was helping the defenseless. A headline on the Washington Post blog two days later–“Obama administration takes on nuns”, regarding the administration’s request that the Supreme Court deny an injunction for the Sisters –implied a mismatch of ability. The first thing I thought of was how devoid of historical memory this administration is. Did they not remember the 1987 NFL lockout? Pulitzer-prize winning cartoonist Jim Borgman portrayed the Little Sisters of the Poor trouncing replacement players back then. 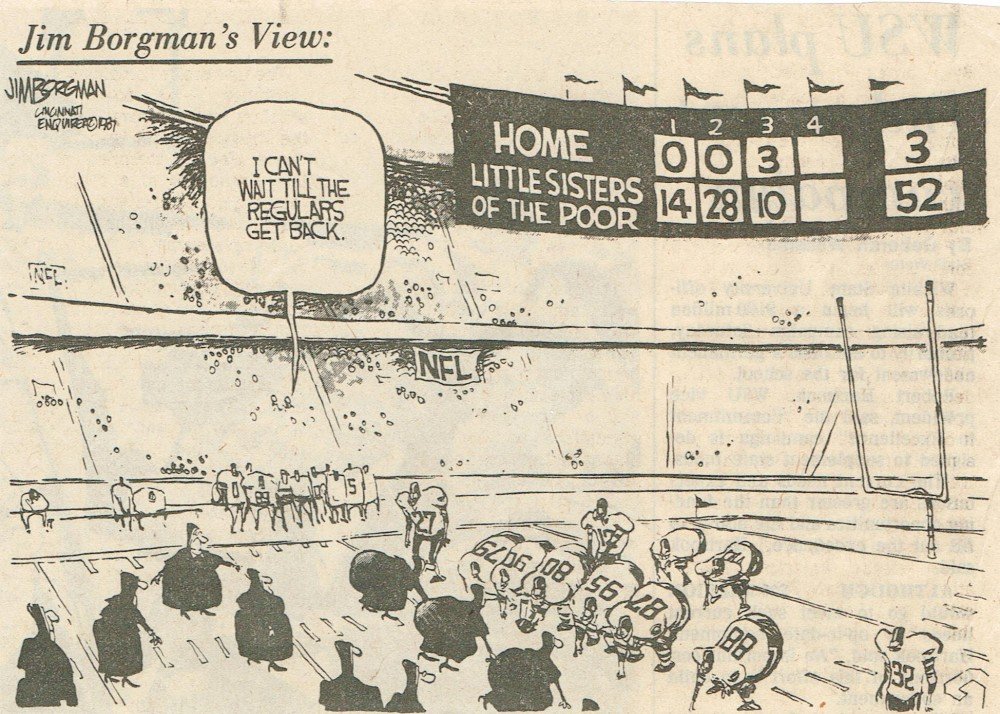 (Borgman © 1987 The Cincinnati Enquirer. Used by permission of Universal Uclick. All rights reserved.)

But the Institutional Religious Freedom Alliance thought of another apt historical analogy. In 1804 the superior of the Ursulines in New Orleans, Sr. Marie Therese Farjon, wrote President Thomas Jefferson regarding a concern. When the Louisiana Territory passed to the control of the United States with the Louisiana Purchase in 1803, the sisters were anxious that their claim to property used to finance their educational mission might be insecure under the government now controlling their territory. The superior argued that educating orphans and unfortunates in “Religion and virtue” would “enable them one day to become happy and useful citizens.” Sr. Marie Therese added that the United States would “reap for itself honor and glory in encouraging and protecting an establishment as useful, and, we might even say, as necessary as ours.”

What was the response of Thomas Jefferson, who twenty-two years later would speak of the Declaration of Independence as a “Signal of arousing men to burst the chains, under which monkish ignorance and superstition had persuaded them to bind themselves”? Twice addressing the Ursulines as “holy sisters,” Jefferson assured them that

“the principles of the constitution and the government of the United States are a sure guarantee [that your property] will be preserved to you sacred and inviolate, and that your institution will be permitted to govern itself according to it’s [sic] own voluntary rules, without interference from the civil authority. Whatever diversity of shade may appear in the religious opinions of our fellow citizens, the charitable objects of your institution cannot be indifferent to any; and it’s furtherance of the wholesome purposes of society, by training up it’s younger members in the way should go, cannot fail to ensure it the patronage of the government it is under.”

It is plausible to assume that the application by a religious group of the actual content of its moral teaching would enjoy even more freedom from “interference from the civil authority” than the group’s property, at least according to the thinking of Jefferson. The present administration is imposing a public orthodoxy about the components of health care that would have left Jefferson as appalled as are the Little Sisters of the Poor.