Ferguson:  Pope Francis and Javert at the Barricade 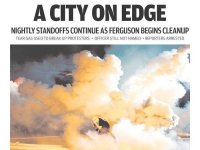 Pope Francis recently sent a special envoy of his, Cardinal Filoni, to Iraq. Providentially, and quite independently of recent headlines, he has someone slated to go to St. Louis as well.

St. Louis is celebrating 250 years since its foundation. On August 24th, Cardinal Justin Rigali, himself a former archbishop of St. Louis, will be Pope Francis’ personal representative at the celebrations. As is customary for such emissaries, the Holy Father has sent an official letter, in officially florid Latin, to his envoy informing him of his mission.

The letter was dated July 20, 2014, but appeared on the Vatican website today, August 18th, another day when there is a lot to read in the press about Ferguson, Missouri, a close-in suburb of St. Louis. Racial tensions are flaring wildly in the wake of the Aug. 9th killing of a black teenager by a police officer. Scenes of rioting and looting and militarized law-enforcement flash across our TV screens and social media feeds.  Investigations and autopsies proceed at the frustratingly slow pace of science while plenty of people on both sides spout their own conclusions about what occurred that fateful day.

In his missive, the Holy Father recalls St. Louis’ history of fruitful Catholic life, worthy of the name of a saintly French monarch. And, addressing Cardinal Rigali directly, says,

“In [this] year dedicated to the founding of [this] remarkable city, you shall encourage all the participants [in the city’s 250 anniversary celebration] that they,  as all created things are ordered to their Creator, may willingly direct all of their energies toward Him, the first truth and the highest good.”

Deep down, the Ferguson riots are about notions of truth and goodness. What really happened to Michael Brown? What motivated his killing? Is the purpose of law-enforcement to protect citizens or to keep them downtrodden? Can a society survive without a common understanding of truth and goodness?

I have spent many hours this summer rehearsing for an upcoming show in my hometown. I am playing Javert in Les Miserables. It has forced me to think a lot about the law and those who “protect and serve.”

A people heads for the barricades when they feel nobody will stand for them. When they have nothing left. When they feel nothing but downtrodden (In Les Mis, the students choose to fight for the people, and call their group “the ABC,” a pun in the French: les ABC = les abbaissés “the downtrodden.”)   Whatever the truth of the sorrowful death of Michael Brown, the riots show us that the people have lost confidence that the police exist for their good.

I have had to think a lot about whether my character, Javert, hates Valjean, whom he pursues relentlessly.  I have concluded that it is more a love of order than a hatred of disorder that moves Javert. The song “Stars” is about the beauty of the stars, which fill the darkness “with order and light” and Javert wishes to minister to that order on earth.

But, as Pope Francis remarks in his letter, the natural ordering of all things to God only serves to remind us that the human creature does not order himself toward God other than willingly. He has to want to. He has to embrace the strength that only comes from God’s grace and rise above his fallen nature. He has to call upon a God whose justice is absolute, but who is also infinite mercy. He has to conform his will to a God who commands the love of enemies. He has to receive a defenseless God who laid down his life for his friends, before many even knew they were called to be his friends.

Javert is the man of natural virtue, of natural justice. He quells the riot because it is the right thing to do.  But he will not cut any slack for a community that lives in the grip of poverty. He serves order, but he looks down on the rabble around him. He doesn’t feel he has anything in common with them. His authority is feared rather than respected.

What has yet to emerge from the Ferguson riots is a powerful voice that transcends the shouts of “my good” and “my truth,” calling all involved to give up their individual claims on the truth in order to embrace “the first truth and supreme good.”  That is not easy in a country that increasingly believes that religion should stay in one’s house and not emerge onto the streets. Well, this is what relativism looks like on the streets, and it is ugly.

I have only driven through St. Louis. I do not know the lay of the land. I am also pretty darn white. I can only begin to imagine the experience of growing up black in American or anywhere else. But, as the Roman poet Terence said, “I am a human being, nothing human is foreign to me.”

Only mercy and forgiveness on both sides will get us anywhere.  Javert couldn’t handle mercy. He couldn’t give it and, when it was shown to him, it drove him to suicide.  His problem was he stopped at the stars, the natural order of things, which are all ordered to God above. Unless we willingly go beyond our truth and our good to God who is the first truth and the supreme good, we will forever remain barricaded inside our shackled hearts.

I don’t know exactly what message Cardinal Rigali will deliver on August 24th. But Pope Francis exhorts us all to go beyond the natural order, even beyond narrowly conceived justice, to the grace and mercy of God himself, beyond the riots, beyond the barricades, beyond the stars.