God Save the Oddballs: The Case for Catholic College 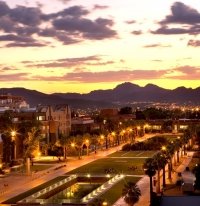 Augustine’s heart was restless until it rested in God. For me it was my legs, too.

When I was a Freshman at the University of Arizona, I used to go on long walks alone at night, restlessly traversing the Tucson, Ariz., campus — always starting and ending by passing the Newman Center that was a block away from my apartment. I was looking for something — I didn’t know what. A place to fit in, I guess. I started college in the dorms as a 16-year-old, and the institutionalized fun my R.A. gamely provided didn’t work for me. I next moved into my brother’s house on Euclid Ave. across the corner from Greasy Tony’s, and though I got along with everyone, that was his crowd, not mine.  Then, I made a crucial error and moved into my own studio apartment.

Alone in the world at age 17, I found myself wandering restlessly across campus pondering life’s questions. The answers were nowhere to be found.

Over at the Register, I ask “Is Catholic College Worth It?” from an economic and spiritual perspective. I conclude that it is. Even before it was published I heard from two different people at the Register: One pointed out that public universities are often as expensive as privates these days anyway, and another asked “What about state schools with Newman Centers?”

The implicit argument: Even if you miss out on Theology from a “mandatum” Catholic college at a big state school, you can at least find the faith practiced and alive. You can still keep your faith.

I would argue, first, that you don’t want to miss out on the Theology (or Philosophy, History and Literature) at a great Catholic college. Even if you just want to “keep your faith” a solid grounding in Catholic thought is absolutely essential. In the history of the Church, faith revivals have come and gone, but those that rooted themselves in intellectual rigor are still here.

Second: Relying on a Newman Center might not work even from a student life perspective.

I don’t mean to criticize Newman Centers at all — they are doing work that will put their staffs in a higher level of heaven than I can hope for, God willing I get there at all. But nothing can replace the variety of religious experience possible at a Catholic college.

I had refused to be confirmed in high school because I didn’t believe in God, but in college I was starting to believe — thanks to Bob Dylan’s Christian albums and an Intro to Philosophy professor whose arguments for the nonexistence of God seemed absurd.

The campus had an active Newman Center that I noticed was open when I passed it on my night walks. I remember sitting in the chapel there late at night once, staring at the sanctuary lamp, the only light in the room, and asking the darkness why I was there. Suddenly angelic voices filled the air in what was either a late night choir practice or a heavenly visitation — I never decided which.

I determined to give the Newman Center a try. I showed up at the next advertised event and stood on the outskirts of the party, looking for a way into the group of earnest but relaxed young men and women enjoying the Chips Ahoy and warm soda. I never found one. After one awkward introduction that ended in uncomfortable silence, I wandered off, and walked out past the library to the big empty football stadium instead. In 25 years, I have never been back (and so my words don’t describe UA’s Newman Center today).

The faith was on campus there, somewhere. But we never found each other. That only happened when I transferred to a small Catholic private university (and the Great Books program within it). At my new school, I could drift over to the Communion Liberation crowd; or sit up smoking and talking with the rock-ribbed Catholic guys who loved Jim Beam, Tom Petty and John Paul; or sit at the feet of the Thomists and submit my questions to their wisdom.

I suppose I am biased because I work at a Catholic college, and perhaps I can’t see past my own experience, but I remain convinced that attending a canon-law compliant Catholic university is well worth the expense, if you can manage it.

I asked a group of guys who went to state schools what they thought. They had great Newman Centers that served them well — saved them, in a couple of cases. But now they recommend Catholic colleges, too. They listed what you get from a canon-law Catholic college but not from Newman Centers:

They also pointed out what you miss: Student life offices at universities these days are not just secular — they are ideologically driven, intolerant of Christian ideas and aggressive about rooting them out.

Newman Centers are doing brave, important, needed work. They are islands of sanity in stormy seas. But they are only islands, and not everyone will wash up there. If I win the lottery, I will definitely donate money to a Newman Center. But I will endow 100 scholarships at a canon-law compliant Catholic college first.