Holy Week With Venerable Paul VI, Prophet on the Dangers to Religious Freedom 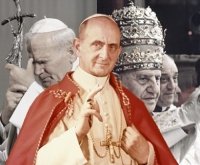 In a beautiful post to this blog yesterday, Fr. Brendan Rolling OSB recounted the impact attending World Youth Day in Denver, presided over by Pope John Paul II, on his own decision to become a priest.  The sheer authenticity and prayerfulness of the vigorous and joyful Holy Father attracted young people to his other-centered message in an age which sanctified self, sensuality and success defined in accumulation of material things.

The message of Pope John XXIII was one of reform and opening of the Church to the modern world. He indeed opened the windows but put the screens of 2000 years of Church tradition and teaching on those windows to let the winds in without letting in the bugs.

John Paul II, after the brief reign of the “Smiling Pope” John Paul I and his predecessor Pope Paul VI, began a long and fruitful pontificate.  His was a most energetic outreach to the whole world with all of his papal visits, voluminous writing, and example of nobility in suffering following the attempt on his life to his years with Parkinson’s disease.

Quiet and benign John XXIII stood in contrast to the gregarious actor turned seminarian who would become the first Polish pope.

As we approach Holy Week and prepare later for the feasts of Easter and the Ascension, and Pentecost, we should remember that Christ promised he would send the Spirit to His Church to be with her until He returned.  That promise included a promise to keep her from error.

Pope Paul VI learned how difficult following the promptings of the Holy Spirit could be.  He demonstrated the profound courage to cling faithfully to 2000 years of church tradition in the face of insistent theological voices, inside the church and out, which were pressing for a more “modern” approach to sexuality.

Most Catholics today could expound on John XXIII and JP II’s roles in recent Church history.  Few would be familiar with the debates in the Church over contraception during the pontificate of Pope Paul VI, and fewer still could expound on his contributions.

Venerable Pope Paul VI (declared Venerable February 20. 2014) was the only Holy Father with whom I came into close contact in my lifetime.  Our all too brief encounter came in the vast auditorium of the papal summer house at Castel Gandolfo when I was in my 20s.

My mother and I flew to Italy to participate in the baptism of my niece and godchild, Christina, and to visit with the family consisting then of my twin brother Bill and his wife Pat and little Tina.  Bill was in the service and was administrator of an Army Hospital in Livorno, Italy near Pisa.  To further celebrate Tina’s baptism at the baptistery at the Leaning Tower there, we planned to tour the Eternal City.

Our brother John, who had friends at the North American College in Rome, arranged for us to sit in the second row of an audience with the Holy Father, Pope Paul VI,  at the papal summer palace.  My twin, Bill, past President of the Catholic Hospitals Association, has had a number of personal encounters with Pope John Paul II and Pope Benedict.  This visit would be the last time I would see a Pope up close and personal.

At the end of the formal presentation as Pope Paul was passing by the first row of the audience on the way to the center aisle, like a typical pushy American, I reached over the front row, put my hand on his shoulder and spoke into his ear.  As he turned he looked back at us those deep set, piercing eyes made an indelible impression on me as he blessed us and turned to go on his way.

Bill asked me, what did you say to him?  I told him I just said “Credo in Verbum Tuum Santa Papa.”  To the linguists among us it would be clear that I mixed a lot of long unused Latin and a bit of Italian to try to say, “I believe in what you say Holy Father.”

From his look and blessing, I imagined he appreciated hearing those words since he had made so many enemies inside the church and outside of it for his encyclical Humane Vitae which reaffirmed 2000 years of church teaching on the sanctity of Human Life.  He even had the courage to go against the recommendations of a pontifical commission he had appointed to study the matter.

It was not uncommon before this encyclical to hear theologians confidently predicting that the encyclical would bring the Church on the side of science and history and permit artificial contraception.  The din was deafening for the rest of his pontificate for his audacity in preferring the content of the faith and sacred tradition to “modern science.”  He would once comment that wearing the Papal Tierra was for him a “Crown of Thorns.”

He must have felt as the Lord did when his friends abandoned on the road to Calvary and even the first Pope, Peter, betrayed him.

Prophets, scripture reminds us, are without honor in their own land.  Paul VI was a prophet of the highest order.  Not only did he declare in an oblique reference to sexual misconduct in the Church, that the “smoke of Satan had entered the sanctuary” but, he also predicted what would happen if the “contraceptive mentality” took hold.

During this Holy Week, which celebrates the Death and Resurrection of the Lord, it would be fitting indeed that we ask, through the intercession of Venerable Pope Paul VI, that as the Supreme Court moves towards a decision on the “contraceptive mandate” it will find for the first amendment’s free exercise clause which permits people to govern their actions in the public arena with their consciences in mind without fear of government intimidation and reprisals.