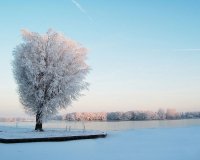 The post-holiday blues are real. The decorations are back in the box and we and our new toys are running on low batteries. Yes, Valentine’s hearts have replaced Holiday displays which replaced Halloween stuff, but people are looking a tad holidayed out. A new year, a new semester, and often the same experience that my resolutions or visions of instant self-improvement climb the steep hill of me being the same person I was in my pre-tinsel 2013 state.

As the saying goes, “the devil is in the details.” But the God who came to do him battle is also there, and that is where we find Him.

Our parish choir is toiling away trying to prepare “Behold the Lamb of God” from Handel’s Messiah for this Sunday.  We are getting there, but it is a challenge for us. But when Andrew and John heard those words from John the Baptist, there was no organ swell or pulsating bass entrance or lilting sopranos echoing the strains.

And the Man he pointed to looked just like a man. And yet, as faithful Jews they knew that John had just told them that the guy over there was the culmination of everything the Old Testament was longing for, the lamb that was to be sacrificed but substituted by a ram in the thicket after Abraham’s arm was stayed from killing his own son.

The first chapter of John’s Gospel goes from “In the beginning was the Word” to this conversation between the Man-Who-Is-The-Word and two disciples of John.

No angels, no Gloria in Excelsis, no Magi on dromedaries bearing scents of the Orient.

The words are so ordinary “What are you looking for?” “Where do you live?” “Come and you’ll see.”  And yet, what powerful meaning they contain. An encounter with God Incarnate, an encounter John himself recalls in his old age, pinpointing that it happened “around four in the afternoon.”

Our God is so awesome that He doesn’t need to be flexing all the time. He is awesome in littleness, in ordinariness. “He looks down upon the humility of his servant,” says Mary. God likes the small stuff. During ordinary time, we get to see Him where He most likes to be. Sure, He can do earthquakes and hurricanes, but soft whispers are where his presence rests.  (Remember Elijah in I Kings 19?)

Don’t let the Januordinariness of these days fool you. God is here, inviting us to come closer and spend silent time with Him so He can whisper deep and silently into our hearts.

“So they went and saw where he was staying, and they stayed with him that day.” (1 John 1:39)  Really, St. John?  That’s all you’ve got?  Nothing about what was said, about the conversation. A whole day with Jesus in one sentence? I guess you had to be there.

Yes, we have to be there. Got the Januordinary blues? I prescribe an hour of adoration of the Blessed Sacrament. Let God show Himself in the small whispers, in the ordinary events of your day.  He’s there in the ups and downs, in the frustrations and successes, drawing you to Himself.