John Paul Is the Reason I’m a Priest 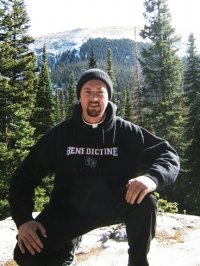 By Father Brendan Rolling OSB | Father Brendan, class of 1993, is Chaplain of his alma mater, Benedictine College in Atchison, Kansas.

Pope John Paul is the reason I am a Catholic priest. I had thought about becoming a priest during my college years, but when friends and I attended the 1993 World Youth Day in Denver, Colo., it was a game changer. The soon-to-be St. John Paul’s witness, conviction, and call for radical conversion in Christ made me want to run for the Gospel.

“Let’s go on a road trip and see Pope John Paul,” were the words of a friend as we sat in the AC of an off-campus house at Benedictine College. One buddy called his dad to ask to use the car. We hadn’t officially registered for WYD events, so someone else called a Denver friend whose father was a deacon to ask/beg if we could crash on their living room floor. Someone else wrote “Honk if you love the Pope” on the back windshield and we began the nine hour drive to Pope John Paul in Denver.

The drive itself was an adventure. Vans full of teens driven by religious sisters honked because they loved the pope. At one wayside rest, a family honked. When they stopped, they said, “we’re Methodists, and we’re going to Denver because we love JPII.”

Because we didn’t have tickets to the stadium, our group encountered Pope John Paul from the Mall in front of the Denver capital.

The media was suspicious and sometimes mean. They predicted crime would increase; it went down. They said not many would show up. Over 500,000 came. The JPII generation defied all the odds they set.

As we gathered in front of a Jumbotron at the Denver capital to watch JPII arrive at the stadium, we got a surprise visit. The helicopter he was in circled the thousands we were with, dipped its propeller and then continued on. When the world and even some so-called Catholic leaders forgot and ridiculed young, faithful Catholics, Pope John Paul remembered us — even from his helicopter. It was my first encounter with this man. I know I wasn’t the only one with tears in my eyes and joy in my heart. He was great.

World Youth Day introduced me to the universal community that Jesus established, his family, the Church. It was not just one parish or for just one nation. I felt what I knew, that the Church Jesus Christ established was for all nations. This changed me. My heart was and is on fire to be part of this reality.

John Paul was personal too. My grandmother, Benedictine College Class of 1929, called from the bank she worked at in Kansas City to say a Jewish woman, the mother of the owner, had just asked her to wire $10 to Pope John Paul with the message, “Don’t spend it in one place.” The woman told my grandmother she was a childhood friend of the Pope in Poland. With John Paul, Catholics and non-Catholics were neighborhood friends. Pope John Paul made a universal community a personal neighborhood.

Perhaps the Jewish tour guide on one Benedictine College Holy Land Pilgrimage described my experience of WYD best when he described JPII’s visit to Israel. He said, “It was like Moses had returned to the land and everyone was changed.”

I know I was changed by him. So was Benedictine College.

Pope John Paul impacted the college in many ways. For me, it was when we implemented his Theology of the Body in the dorms that his impact was and is most felt on campus. .  Some students were fighting for co-ed dorms.  Pope John Paul’s Theology of the Body helped everyone understand God’s plan for men and women.  That men needed men’s dorms to be men, to learn to shamar, to build manly friendships, to find brothers in Christ.  That women needed women’s dorms to be women, to learn unity, to build womanly friendships and sisterhood in Christ.  There is a feminine genius and masculine adventure and Pope John Paul helped students begin to recognize the gift of their sexuality.  Dorm life rooted in a Christian anthropology is something young people are thirsty for.  Pope John Paul’s Theology of the Body answered their deepest questions about friendship, sexuality, and the importance of a brotherhood, sisterhood and community that was Christ centered.

This was quite a change. The college was one of Playboy’s top ten party schools in the 1980’s and only a handful of students attended daily Mass. The last dorm to have a chapel built in it was constructed after World War II. When we implemented the Theology of the Body, along with other dynamic initiatives, dorm vandalism dropped dramatically, student retention radically increased, student satisfaction with life on campus grew, Mass attendance exploded, confession lines went from one line to four lines, almost 300 students have entered discernment for priesthood and religious life and even more have answered the call to marrying well.

John Paul put Christ back at the center of their lives and of Benedictine College, so it’s fitting that we will name our Student Center in honor of St. John Paul II on the day of his canonization.

Pope John Paul bridged every part of life, every professional and academic discipline, every human activity back to Jesus Christ. What better place than a student center to be named after him? It has athletic facilities, he was an athlete. It has a performing arts theater, he was an actor. It has a food court, he was always in coffee houses talking to young people. It has the St. Martin Center, he was a man of deep faith. It has a Student Life center, his Theology of the Body has impacted the lives of young men and women around the world.

And I will always remember that hot summer of 1993 when a group of students drove out past that building to go and see him, and how everything changed after that.

That was profoundly beautiful!!

I wasn’t Catholic while JPII was alive – however, his life changed me from the moment I knew of his death in 2005 – until the day I became a Catholic in 2010!  I was in Rome as a half-hearted protestant Christian only 5 months after he died touring St. Peter’s.

Strangely enough, I was at Fatima as a half-hearted protestant Christian not long after he had visited the site.

I knew nothing of what it meant to him or what the vision of the Three Children meant.  Sr. Lucia was still alive and I knew NOTHING!  But, I know JPII’s life was used by Our Lord and The Holy Spirit to draw me to all things Catholic!

I still call myself one of Papa JPII’s “girls”.

Peace of Christ and blessings on you!

Thanks, Father. Testimonies like yours help preserve faith and and hope. Not to mention encouragement. Just like St. Paul said.
Thanks, again.

Great article.  Thanks for your witness, and the beautiful reminiscences of soon to be St. John Paul.

Father Brendan’s testimony really touched my heart.  As I write, this my youngest son is in the seminary studying for the priesthood.  I have no doubt that his vocation was fostered and developed my the tremendous environment Benedictine provided and the guidance and example of men like Father Brendan. He was and still is an inspiration to all the students there.  A father could have no greater prayer answered than seeing his son become the man God wants him to be.  Go Ravens!

Wow! As a new Catholic, who was fed anti-Catholic lies as a Protestant, I am so excited to hear about the great Popes of the past, especially most recently Pope John 23rd and Pope JPII. I am particularly excited about their canonization on Divine Mercy Sunday, this most exciting celebration where Jesus will pour His mercy out on all who are willing. I did not know until recently how instrumental both of these men were to propagate and safeguard this Gift of Mercy and plenary indulgence that surpasses all others.

Thanks so much for a post full of hope.

Impressive that you listened to the call.

Great post, Fr. B! Your perspective is so unique, since you’ve been there through it all.  Thanks for posting.