John Paul the Prophet and the Family 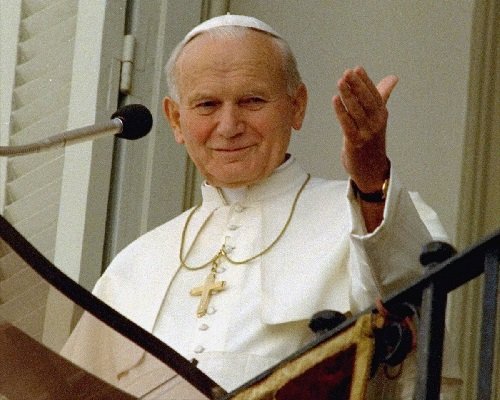 It is providential that St. John Paul II’s first official “saint’s day,” Oct. 22, came in the wake of the 2014 Synod on the Family.

John Paul was a prophet on marriage and the family. He knew exactly the importance of Church teachings on marriage, and he will be praying powerfully for those teachings to transform the world.

Here are five of the Pope’s prophetic teachings on the family that are even more relevant today than they were when he pronounced them.

1. Destroy the family and you destroy civilization.

Said St. John Paul II: “As the family goes, so goes the nation and so goes the whole world in which we live.”

The family is not just the foundation of society to John Paul II — it’s the glue that holds it together.

In Centesimus Annus , he wrote that “The individual today is often suffocated between two extremes represented by the state and the marketplace.” It is primarily families that “strengthen the social fabric, preventing society from becoming an anonymous and impersonal mass, as unfortunately often happens today.”

To a bureaucrat, we are a social security number. To a merchant, we are a dollar sign. But we are of infinite dignity and value, to be loved unconditionally. Only our families ever come close to treating us that way.

2. Our bodies have a meaning.

Said St. John Paul II: “Families will be the first victims of the evils that they have done no more than note with indifference.”

The new fad today is to reinvent ourselves radically without reference to who we are made to be. But St. John Paul II had a deep understanding of the danger posed by refusals to take man as he is found.

His Theology of the Body saw clues embedded by God in our very bodies that show the enormous importance of marriage and the family. Fundamentally, John Paul’s “Theology of the body is the recognition that we are built for each other — man for woman and vice versa.

His “nuptial meaning of the body” describes not just the sexual compatibility of man and woman but also the emotional and psychological complementarity of “feminine genius” and those sons of Adam who was “not meant to be alone.”

Only by being true to our bodies can we “become who we are” in his memorable phrase.

3. Contraception changes relationships for the worst.

Said St. John Paul II: “The two dimensions of conjugal union, the unitive and the procreative, cannot be artificially separated without damaging the deepest truth of the conjugal act itself.”

The results of the contraceptive revolution have been devastating to families. Thinkers such as Mary Eberstadt and Janet Smith have done an excellent job of showing how it has led to divorce, abortion and a host of other ills.

And it stands to reason: the more sex is reduced to recreation on the one hand, or an animal urge on the other, the less it serves and the real needs of loving couples.  In often frank language, St. John Paul saw especially the importance of “the moment in which a man and a woman, uniting ‘in one flesh’, can become parents.”

At that moment, he said, “The two dimensions of conjugal union, the unitive and the procreative, cannot be artificially separated without damaging the deepest truth of the conjugal act itself.”

4. Witnessing to family life is a primary call of the New Evangelization.

Said St. John Paul II: “To bear witness to the inestimable value of the indissolubility and fidelity of marriage is one of the most precious and most urgent tasks of Christian couples in our time.”

The greatest answer to the world’s questions and concerns about marriage and family, said St. Pope John Paul II, was to see it witnessed and lived by Catholics.

He used the word “witness” 40 times in his groundbreaking document on the Family in the Modern World.

5. Threats to the family are as urgent as threats to peace.

“At the start of a millennium which began with the terrifying attacks of September 11, 2001 … one cannot recite the Rosary without feeling caught up in a clear commitment to advancing peace,” said St. John Paul II, then added, “A similar need for commitment and prayer arises in relation to another critical contemporary issue: the family.”

It was when Pope John Paul II made that urgent call  that my own family, which had been spotty at best at praying the rosary, began to do so in earnest. This October, the month of the rosary, is a great time to redouble our efforts.

St. John Paul was indeed a prophet: Lose the family and you lose personal identity, real couple love and  solidarity, the love that holds society together.

Lose the family and you lose everything.

As Cardinal George Pell of Australia said at the close of the Synod, we are in no danger of losing our rich Catholic teaching on the family. “Our task now is to ask people to pause, pray, and catch their breath.”

St. John Paul II, join us in this prayer. Help us be worthy witnesses of the great and vital truths of the family that you expressed so eloquently — and so urgently.