As John underwent multiple surgeries amid bright moments and set-backs, the call for prayers went out through Facebook and e-mail. Even the Cardinal Newman Society joined in. John’s favorite team, the Green Bay Packers, sent a football signed by the team and a get-well card signed by quarterback Aaron Rodgers.   The prayers worked — John survived — but now needs constant care as he continues his recovery. His mother wrote the following on the eve of the one-year anniversary of Johnny’s accident.

… and the blessings that followed

By Dr. Kimberly Shankman || Dean of the College, Benedictine College

Well, John got his feeding tube changed and unchanged today! After they switched out his current tube to the new one, it turned out that the new one was the wrong size (and they have to order the right size) so they had to put the old one back in and we need to take John back next week to get it changed again.

At least John got a trip outside to enjoy the beautiful weather today! Other than that adventure, it was a pretty quiet day.

This day last year was the last day that I got irritated at John for leaving his shoes in the middle of the floor.

It was the last day he took off his shoes.

It was the last day he teased his dad (Don had texted him at school when the white smoke went up at the Vatican; John was really enjoying giving him a hard time — “hey, Dad, I go to a Catholic school; don’t you think they’re going to let us know that we have a Pope?”).

It was the last day he sat on the couch with his dog.

It was the last day that he drove me crazy-we ate in the living room that night–sitting sideways in his chair picking at his dinner and leaving half of it scattered on his table, chair, and the floor. (Bosley very much approved of this method!).

It was the last day he ate dinner.

It was the last time he got on my nerves with his non-stop “witty” commentary on the tv show we were watching (to be fair to him, a lot of times his comments actually were witty, but sometimes they really, really weren’t).

I have to tell you that if I had a time machine and could go back and find the words to say that would keep him off that truck and let us go back to our normal life, I would do it in a heartbeat.

But I also know that my ways are not God’s ways. “Normal” is not what He had in mind for us, and His blessings on this new path have been so overwhelming that I can’t even begin to describe how much peace and joy we have experienced throughout this whole journey.

I can’t say that the accident itself was a good thing, but I will say that so very, very many good things came out of the accident that it has become, in my life, a clear and powerful testament to the glory of God and His loving care for all of us.

The primary way God has chosen to shower his blessings on our family is by surrounding us with wonderful people who keep us all lifted up with loving thoughts and prayers. God bless you. 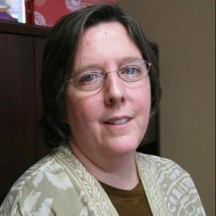 Kimberly Shankman is the Dean of Benedictine College. She received her PhD in Political Science from Northern Illinois University. Subsequently she taught in the Politics and Government Department at Ripon College from 1985-2001, when she left to take her current position at Benedictine College. Her research interests are American political thought and constitutional law. She is the author of Compromise and the Constitution: The Political Thought of Henry Clay. Additionally, she has published articles relating to the privileges or immunities clause of the 14th amendment and other aspects of constitutional law. She spoke recently on “Truth and Democracy” at the University of the Sacred Heart in Milan, Italy, and on “Human Capital in Caritas in Veritate” at Columbia University in New York