Love in a Time of Ebola 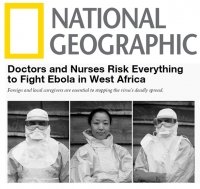 Ebola is the latest disease to show us how horrifying suffering is — and how beautiful nurses and doctors are.

We rightly admire military chaplains who put themselves in the line of fire and die with their men. We should admire nurses and doctors in the same way.

Is it any surprise that the new Dallas Ebola victim, reported Sunday, was a health care worker treating the first victim? Or that Spain’s first victim was a nurse treating two missionaries?

It is the same in Atlanta. Two American medical missionaries contracted the deadly communicable disease, and at Emory University Hospital, four doctors, 15 nurses and five chaplains have put themselves at risk to serve them.

“From the day they committed to being nurses, they are very compassionate people, they see themselves as this is why they are here,” the hospital’s head nurse told NBC News. “I could not be more proud of what they’re doing. It’s inspiring to me.”

It’s inspiring to all of us.

Don’t get me wrong: Heroic virtue is not a requirement of anyone, or any job. Medical professionals have tough decisions to make when a terrible plague hits. They know the danger and they are under no obligation to expose themselves to it. But that only makes the decision of those who do all the more heroic.

We cannot thank the Ebola nurses and doctors enough — and we cannot measure the longterm effects of their service. I firmly believe we owe the pontificate of St. John Paul II to just their kind of witness.

Much has been made of the fact that Karol Wojtyla’s mother died when he was 9. But he has said that his brother’s death was far more significant to him.

“These are events that became deeply engraved in my memory, my brother’s death perhaps even deeper than my mother’s death,” he said, “equally because of the special circumstances, one may say tragic ones.”

Edmund Wojtyla was a hero to his younger brother, Karol. Imagine how a boy would look up to his only living sibling, a brother, 14 years older, who takes him hiking and teaches him to ski.

Edmund loved theater and soccer. Karol developed interests in both.

When Edmund died of scarlet fever he contracted caring for a patient, Karol took it hard. Years later, friends remembered how he cried at the funeral.

But the heroic death of Edmund probably did as much as any other life experience to form John Paul’s idea of holiness.

“The Pope has to be attacked,” he said, late in life as he suffered for his job, too, “the Pope has to suffer, so that every family and the world may see that there is … a higher Gospel: The Gospel of suffering, by which the future is prepared, the third millennium of families, and every family and of all families.”

The Pope was a great mystic, but every good nurse must know what he is getting at.

A National Geographic story describes how “Doctors and Nurses Risk Everything to Fight Ebola in West Africa.”

“You have very intense moments and you want to hug someone and you can’t,” says one. She connects with them as best she can through her eyes — the only part of her a patient can see, through her protective goggles.

Even in National Geographic, it doesn’t take long to find out why these women do what they do.

“I feel that my faith gives me the purpose, and the tools and the hope I can give people,” says Deborah Eisenhut.

Nancy Writebol tells the magazine: “You can’t emotionally take on the responsibility for all of it. You do what you can do and let God deal with the rest.”

I remember talking to a Benedictine College nursing student who had spent time with the Missionaries of Charity in Calcutta — and almost decided to change majors because of it.

She wore herself out bathing, bandaging and tending to the needs of patients as they were having some of the worst moments of their lives, and it began to dawn on her what a very tough life lay ahead of her as a nurse.

A fellow volunteer noticed her flagging enthusiasm, and told her a story. Mother Teresa once asked him to bathe a badly disfigured patient, he said. He was reluctant, and standoffish. But then a strange thing happened. Before his very eyes, the patient disappeared and Christ was there. For a moment he was very literally bathing the body of Jesus Christ.

His whole demeanor and energy changed as he continued the job. Mother Teresa noticed the transformation. “Ah!” she said. “You saw Him, didn’t you?”

That story changed the student’s life — and many others, through her, I’m sure. She’s now a nurse. She recently tweeted, “If I could just touch the hem of his garment …”

That is exactly what Ebola nurses are doing right now.

This article first appeared in Aleteia.