Man was not Meant to Be Alone 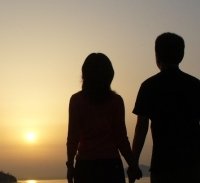 By BEN RIOUX | Benjamin Rioux, a Benedictine College student, was the founding coordinator of Youth Outreach, which offers summer camp programs for high school students in Great Books and the sciences and Catholic Underground evenings each month. Information here.

I read an article by Jamie Varon over Easter break titled, ”A Relationship will not make you happy.” Being very happy currently in my relationship I was interested as to what argument the author might provide, so I read through it and decided to write a response. The article was predicated on a number of small errors and one massive and complete misunderstanding of what it means to be a complete person, what it means to be in a relationship, and really what a community even is.

“You make yourself as happy or as unhappy as you want.” Not according to the Church. Gaudium et Spes spends a great deal of time on Man’s Communal nature. In other words, a gathering of some of the wisest men on earth, tasked with producing a document on problems facing the Church in the modern world decided to put in 2 entire sections concerning man as community (Chapter II 24 and 25). “It was not good for Man to be alone.” For Varon happiness isn’t a state of being, “Happiness is a feeling.” What they are actually talking about here is pleasure, not happiness. And it’s true that a relationship will not always be pleasant.

Varon has a completely wrong idea of what a relationship is; “You are attracted to someone based on how much they can allow you to grow.” In other words, a relationship is entirely focused on what you get out of it, not what you put into it. A real relationship, and a real community, is about outdoing each other in charity, sacrifice, and accepting each other’s gifts and sacrifices. You have to desire what is best for each other, anything less and what you end up with is a failed relationship. She is right, it’s not all nice, but the road to happiness isn’t nice either.

According to this view, your significant other is a means to an end, which is absolutely right. Varon just mixed up what the end is. In a real relationship, you are discerning marriage together, looking and examining each other to see if this is a person with who can help you get to heaven. Getting to heaven is the end, and the person who will best help you get there is the one you should marry. But, according to this article, a relationship “Ends when you’ve each served your purpose to each other, in terms of growth.” Nothing more. You are just a tool for me to see myself more clearly, and once I see how awesome I am I will no longer have any need of you or any other thing to make me happy. “Love is higher expressions of yourself.” Not a sacrifice of yourself.

This Easter season we are confronted with the highest and most complete love possible: the death of Christ on the cross. This was not an instance of Christ realizing his full growth-potential; this was sacrifice, raw, bloody, sacrifice. Christ got nothing out of His relationship to us, and while it wasn’t romantic, Christ was a part of our community, which is why His sacrifice redeemed us. He was man, and so He was a part of the community of all men. Sometimes we can get an over-inflated idea of the importance of a romantic relationship, and do not realize the absolutely essential existence of the community. Take the idea of development, authentic development is how we are perfected, and it requires that we perfect others. In other words, once someone is fully developed, the whole world will be because in order to get fully developed he would have to perfect everyone else. Authentic development isn’t done only in a relationship, but that doesn’t mean it isn’t done in a relationship.

Varon concludes her piece by saying, “We’re here for more than just constant bliss.” Which is funny, because in fact that is exactly what we are here for. It isn’t going to be easy, in fact it is going to be hard, but one beautiful way to get it done is with another person to help you along the way. Obviously not everyone is called to marriage, but that doesn’t mean some aren’t, and that those who are blessed with that vocation can be perfected by it. Let me conclude my piece by saying, this community has been given to you by God. You belong to it, and it belongs to you; care for it, guard it, and nurture it. If you have been given the gift of a relationship, realize your duty before God; that above all, we were made for Heaven, and that none of us is going to get there on our own.