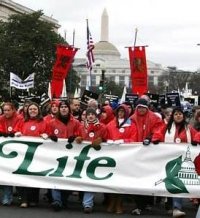 This year, Benedictine College will be leading the March for Life in Washington, D.C., thanks to a mother who refused to abort a bishop.

My favorite argument against abortion is the George Bailey argument. Bailey is the character in It’s a Wonderful Life who gets a glimpse of what the world would be like if he never existed.

What George Baileys are we missing because of abortion? What kind of world would we have if they had lived?

One near miss: The Ravens Respect Life group leading the March for Life this year would have gotten aborted away, if one doctor had his way.

Bishop Andrew Cozzens of St. Paul-Minneapolis told me the story. In October, Pope Francis named him a bishop, making him the seventh “Raven Bishop” (Benedictine alum bishop) in the 21st century.

Growing up, he said, his mother would tell him, “God saved your life because he has a plan for you and your job is to find out what that plan is,” said the bishop. “That’s true of everyone but this story made that impressed on me in a deeper way.” 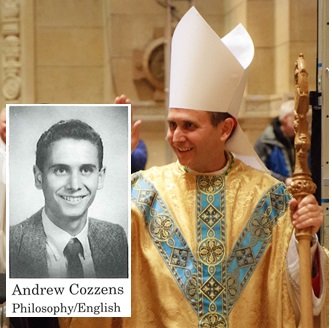 One of the things that God created him to do was to cofound Ravens Respect Life at Benedictine College, apparently. “We were the first group to organize trips to the March for Life to Washington, D.C.,” said Bishop Cozzens. “We took a couple of buses back then.”

But he almost wasn’t there to start it.

“When my mom was 20 weeks pregnant with me, her water broke and she went immediately to the hospital,” he said. “She and my father spent a night in prayer that they would not lose the baby. The next morning, the doctor came in after running some tests.”

The doctor said, “I need to tell you that your child is severely deformed and I recommend that we induce labor” — in other words, end the child’s life prematurely.

The doctor answered, “You don’t get it — this child is a freak.”

“I don’t care what you say,” she answered. She was determined to keep her baby — and to get a new doctor.

A second doctor was sent and he said the baby would be fine, “If you’re willing to lie in bed for the rest of this pregnancy.”

The parents were happy to do just that. But “How will we pay?” they asked. Insurance wouldn’t cover a months-long hospital stay.

The new doctor said not to worry. He had made a bet with the first doctor that she would deliver a healthy and normal child. If the baby was normal, Doctor 1 would pay for her $1,200 hospital stay. If not, Doctor 2 would pay.

“When the second doctor delivered me he told the nurse to go get the other doctor and tell him to see his ‘little freak,’” laughed Bishop Cozzens.

The “freak” would later help start the March for Life, and another student a few years behind him would take up the slack: James Albers, who is now Abbot James of St. Benedict’s Abbey on our campus.

Abbot James will be riding one of our eight buses on the 1,000 mile-plus trip to lead the March for Life this year — along with faculty, staff and 386 students, nearly 25% of our student body.

It is no coincidence that the pro-life leaders in college become leaders in the world later on.

Bishop Cozzens said: “The pro-life issue has been in a certain way the key issue in the cultural battles that we are deeply immersed in in the United States. It was the first dividing point for the future. We had to decide: Would we be willing to live sacrificially for another, or not? Being involved in the pro-life movement is a key to those who support the founding dream of the United States. College students need to be involved in that, if they will be involved in building a culture of life, which is one of the great tasks of this generation.”