March of Science Supports the March for Life 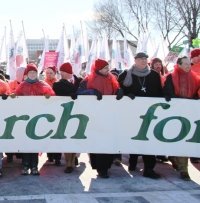 As the eight busloads of students and staff made their way back to the Benedictine campus after setting the pace at the March for Life in DC prayers of thanks for their safety are clearly in order.

Benedictine students, the College President, Abbot James and several monks were leading the March and in the process acting as the vanguard of a youth-driven countercultural movement. There was a day not too long ago when being countercultural meant the drug scene, angry language, and sexual permissiveness. Today’s culture seems to accept such 1960s thinking as a given. To oppose Timothy Leary’s mentality now makes one countercultural. That is why Pope Francis keeps emphasizing the need to evangelize the culture.

Often people are skeptical of what good the march has done over the 41 years since Roe v. Wade decision. These legions of mostly young people who enthusiastically trudge through blizzards and bone chilling cold year after year are a testament to fidelity. As Mother Teresa was wont to say about acts of human compassion and love, God does not call us to be successful, but only to be faithful.

Next to the word “faithful” in the Funk and Wagnall’s dictionary, there should be a picture of Nellie Gray. Two years ago at 88, she was found dead in the little home office from which she planned the previous Marches which gave witness to the sanctity of the life of the unborn and compassion for the other victims of abortion including the mothers, fathers, and the abortion providers themselves.

It was only a matter of time before the rhetoric of “reproductive health” and “women’s right to choose” would be challenged not just by “Catholic School Children” bussed to D.C. by their institutions (as the abortion lobby has taken to belittling them) but by science. A number of states have outlawed abortion after the 24th week with the viability and pain of the unborn child in mind.

Some, like Nebraska, North and South Dakota, among others, have worked to create fetal pain legislation to severely restrict abortion from the 20 week point at which today’s science has determined the little one in utero could feel the pain of being aborted. They are up to date on the science of fetology.

When a woman is pregnant, science demonstrates with things like 4D ultrasounds, the doctor who is caring for her has at least two patients.

The Director of the Largest Abortion Clinic in the United States in New York, before Roe v. Wade — the late Dr. Bernard Nathanson — while viewing a grainy ultrasound of the procedure, noticed that when the surgical instrument of dismemberment was inserted into the mother, the little one recoiled unsuccessfully from the tools being used to end his life. The monitor displayed an open mouth letting out a “Silent Scream” which he could not hear in his ear, but the experience resonated in his very heart and soul. Before long he, like Nellie Gray and the original “Roe” (Norma McCorvey), devoted his life to ending the horror that science and technology has long demonstrated is visited up a tiny defenseless member of the human family in every abortion. His book Aborting America provided a chilling insider account of the mental gymnastics necessary to justify the grisly procedure.

It is hopeful indeed to see in recent polling data that the 18-34 age groups turning away from Planned Parenthoods unrestricted abortion rhetoric.

Twenty something Lila Rose has by investigative reporting, peeled back the veil shrouding abortion scams in Planned Parenthood Clinics. Despite every effort of secularist educators in colleges and universities, their disciples in public junior high and high and private schools across the nation, mass media marketers of death, and Hollywood’s smug self proclaimed advocacy of a woman’s “right to choose” these “illuminati” are finding their stale deceptive sloganeering being exposed by scientific data and investigative reporting for the propaganda that it has always been.

Supporters of abortion love to characterize the march as a collection of “church ladies” and religious zealots. Recently, Governor Cuomo of New York referred to politicians who are “pro-lifers” are nothing but extremists who didn’t belong in his state. How often have we heard that anyone who would suggest that society needed to stop the carnage was obviously “behind the curve of history.”

Now it is becoming clear that the Planned Parenthood version of the curve of history is out of touch with the march of medical science. Young people recognize that their generation has been hollowed out by the abortion mentality. They have placed themselves at the forefront of a counter-revolution.

Saavy millenials are no doubt familiar that the evidence of the carnage wrought by recently convicted late-term abortionist Dr. Herbert Gosnell. (see an earlier post on his case in the Gregorian) Young people like Lila Rose have used cell phone cameras to expose the tactics designed to encourage women coming into abortion clinics to have abortions often, whether they are pregnant or not.

In a conversation I had on the street in Washington Square near the NYU Law School in New York in 1976 with then Supreme Court Chief Justice Warren Burger, he tried to defend the court action in Roe saying that none of the justices who supported Roe expected that abortion would be used as a form of birth control. According to 2011 report of the Planned Parenthood spin off organization, the Alan Guttmacher Institute, 54% of the women seeking abortions reported they had used condoms or pills in the month they conceived. So much for the argument that contraception greatly limits the number of abortions

Faith and Science, as they should be, are increasingly in accord on “a woman’s right to choose.” The grace generated by the legions of marchers and the prayers they have offered continue to change hearts. Science can only go so far. People don’t personally change the hearts of others but, the Holy Spirit does it through Grace.