Mary Leading the March for Life 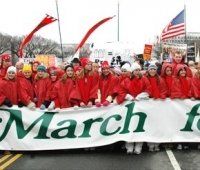 Students say it is no coincidence that Benedictine College was chosen to lead the March for Life in the year of its consecration.

“I think Mary has definitely had a hand in us taking eight buses and the overall success of our trip to the March for Life,” said Kathryn Brown, the college’s Ravens Respect Life student coordinator.

The signs of Mary’s involvement are everywhere, she said.

Taking a quarter of the student population more than 1,000 miles is expensive, but Kathryn  said she got a call over Christmas break from the college’s advancement office that they had found a donor.

“Her only stipulation was that we carry a copy of a picture she had seen on EWTN of the Blessed Mother with Jesus in her womb,” said Kathryn.

The students also got a call from the World Apostolate of Fatima — Our Lady’s Blue Army. The group has a statue of Our Lady of Fatima that was blessed by Pope Francis in October a week after he consecrated the world to Mary. They wanted Benedictine College to carry the statue in the March for Life, as the first leg of its nationwide tour.

That is appropriate, because this  year has become a kind of Marian Year on campus after Benedictine College was consecrated to Mary on Sept. 8 — Mary’s birthday — by Abbot James Albers. As a student, Albers participated in the college’s first March for Life trips, and he will ride the bus with students and will be holding the lead-off banner in the March.

So will President Stephen D. Minnis, who started the Memorare Army to pray for religious liberty and for the college, and who has helped lead the school in Marian devotion. Hundreds of the college’s students have consecrated themselves to Mary at the school this year, following his example and encouragement.

When I asked students why they were marching, senior Karianne Bolduc told me, “It is my goal to grow closer to Mary this year.”

What does Mary have to do with the March for Life? “Spiritual adoption,” said Karianne. “As a Catholic, I believe that as Jesus was dying on the cross, he gave Mary to each of us as our spiritual mother.”

Then she told me why she has been so committed to the pro-life cause.

“Growing up, like most Catholics, my family was very pro-life. We offered up prayers for the end of abortion each day, prayed the Rosary in front of Planned Parenthood, volunteered and collected items for our local crisis pregnancy center,” she said. “In high school, I was positive that I wanted to be a nurse on the delivery floor. My goal was to learn about NFP and work in a Catholic hospital after college.”

She volunteered for many years on the Mother and Family Floor of her local hospital. “I was able to giving hearing screens, bathe the babies, organize paper work, and visit with the new moms,” she said. “I loved every minute of it.”

But one day, she said, “There was a different feel on the floor. All of the nurses were very somber.”

She learned that a Down Syndrome baby was being aborted on the floor that day. A nurse tried to tell her everything was okay, but she knew it wasn’t.

“I felt sick. There was a perfect little baby right behind the closed door who was about to be harmed and I felt as though there was nothing I could do,” she said. “I went into the bathroom and cried. I had never been that close to an abortion before.”

She went home and eventually quit the job and never went back. Though she was only a high school volunteer, she felt like she had failed to stand up for what she believed in. Her parents suggested that she talk to her parish priest about it.

“He said that the little baby might not have anyone praying for him,” she said — so she made that her mission.

“Today, that little baby’s name is Aiden,” said Karianne. “I light a candle for him almost every day in Mary’s Grotto” on campus.

She is marching, she said, for “Aiden and every baby who is today watching us. They were denied the opportunity to be a part of this world that we are not afraid to proudly share our beliefs with the whole country.”

She knows how Mary, who spiritually adopted every one of us, born or unborn, must feel.

“She must weep over how many lives of her children have been lost due to abortion,” she said. “But I hope that she will be smiling on us as we march in Washington, D.C.”