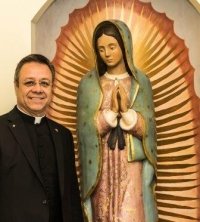 Our Lady of Guadalupe Hall, Statue Blessed along with St. Juan Diego Chapel

Benedictine College dedicated Our Lady of Guadalupe Hall, as well as the chapel and statue inside, over Family Weekend, Oct. 3-5, 2014. With Benedictine known as the Flagship College of the New Evangelization, it was natural to name Guadalupe Hall, the 10th new residence hall built on campus in the past ten years, after the “Star of the New Evangelization.”

Inside the hall, the St. Juan Diego Chapel and the specially commissioned statue of Our Lady of Guadalupe were also blessed in a separate ceremony.

“This new chapel will be a great benefit to our students, giving them another place of worship on our campus,” said Benedictine College President Stephen D. Minnis during the dedication of the chapel on Friday night, Oct. 3.

Before the dedication, the St. Juan Diego Chapel was formally approved for services by Archbishop Joseph Nauman through his representative, Fr. John Riley, the Archdiocesan Chancellor. A special mass was celebrated by the Chaplain of Benedictine College, Fr. Brendan Rolling, and concelebrated by Msgr. Eduardo Chavez, canon at the Basilica of Guadalupe in Mexico City. The Huerter and Diederich families had donated the funds for the chapel.

Following the chapel dedication, the new statue of Our Lady of Guadalupe was blessed. The art niche and the statue within it are directly across from the entrance to the St. Juan Diego Chapel. The statue was sculpted by Alexandra Stimson using wood from an Ash tree.

According to the artist, the Ash is known for its properties of absorbing vibrations. As devotional art, she said the statue will naturally inspire feelings of love and reverence. Over time, the cumulative vibrations of love, reverence, and devotion will be radiated back into the environment, blessing everyone who beholds it. The statue was unveiled by Mollie Minnis and Brianna Sluder, founding members of the FIAT student group on campus.

Our Lady of Guadalupe Hall

It was a brisk Saturday morning on Oct. 4, as students and families gathered for the dedication of the hall itself. The ceremony was conducted by S. Anne Shepard, OSB, prioress of Mount St. Scholastica Monastery, and Abbot James Albers of St. Benedict’s Abbey. Msgr. Chavez assisted with the blessing.

“Our Lady of Guadalupe is tied directly to our college theme this year, ‘You Are the One I Have Chosen,’” said Minnis. “That quote is taken from the words St. Juan Diego reported from Our Lady at her second apparition in Mexico: ‘Listen, my child: There are many I could send, but you are the one I have chosen for this task.’”
The building façade features 12 stars representing Mary’s crown as described in the Book of Revelations. That idea was first brought up by the Class of 2014 Senior Class President, Pete Ambrose. The Class of 2014 helped pay for the placement of the stars as their senior class gift.

Other Marian items inside the building include the ‘M’ from the Miraculous Medal in the entryway floor; the specific Marian names on the rooms; the Mary pictures in the rooms; the blue and gold furniture upholstery, the fleur-de-lis design on the sofas, and the Marian Holy Day names for each of the four floors.

Msgr. Chavez was the Family Weekend Speaker on Friday night, drawing a big crowd to the McAllister Board Room in the Ferrell Academic Center. He delighted the audience with his friendly personality and his stories of how Our Lady of Guadalupe is being recognized and honored around the world.

He said the secret of the importance of the image of Our Lady of Guadalupe is that she is wearing a black sash around her waist, a traditional sign that she was with child. Chavez noted that the very center of the image is not Mary, but that black sash.