Sunday: On Passion Sunday, Look for the Capital Sins and Virtues 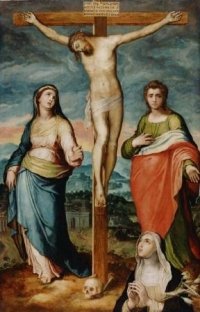 Christ’s passion is a good remedial lesson in the seven deadly sins. This Sunday, be on the lookout for all seven during the reading of the Passion — and lookout  for them in your heart.

Pride: When Jesus is in disrepute, Peter’s pride does not allow him to stand by his friend.

Greed: Judas was led to his betrayal of Christ through complicated motives, but love of money was a major corrosive element for him.

Envy: The Sanhedrin made theological mistakes regarding Jesus, but envy of Jesus’ success is the engine that drives their passion.

Anger: The crowd that shouts “Crucify him!” indulges in wrathful anger and hatred, which apes and mocks true desire for justice.

Lust: The story of the Passion doesn’t depict any impure physical desire, but “lust” is akin to all sensuality. This we find in the apostles’ unwillingness to stay awake and pray in the Garden.

Gluttony: It is suggestive that the betrayer is given away because he “dips his hand in the bowl with me.” For him, this is one meal that was definitely more about the food than the company.

Sloth: The sin of acedia (sloth) isn’t exactly “laziness.” It is a state of not caring about doing the right thing. Pilate starts to understand the wrong in what he is doing, but he does it anyway.

Of course, the Gospel is here to teach us virtue, not merely to recognize sin. Christ shows the opposite virtues to these capital sins.

Humility: Jesus is the model of humility, as he accepts an ignominious death, renouncing pride.

Charity: Jesus shares his Passover meal even with those who are going to betray and abandon him; this is the opposite of avarice.

Love: Far from being caught up in envy, which tries to harm rivals, Jesus gives his enemies chances to do the right thing — and forgives them as they attack him.

Patience: While wrath apes justice as it destroys it, Jesus’ long-suffering acceptance of the faults of his apostles is what saves them in the end.

Chastity: The way Jesus accepts the sufferings of the cross shows the self-discipline necessary for chastity and the antithesis of lust.

Temperance: There is no gluttony in Jesus. Rather than using food as a comfort or using wine to deaden his pain, Jesus uses food as a way to unite with his apostles and refuses to drink on the cross.

Diligence: Jesus shows the opposite of Pilate’s spiritual sluggishness when he says, “My Father, if it is possible, let this cup pass from me; yet, not as I will, but as you will.”