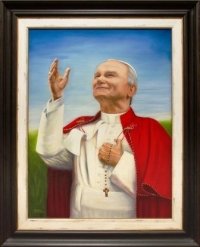 Remarks Note the Importance of John Paul to Benedictine College

On the vigil of Saint John Paul II’s first feast day as a saint, Benedictine College chaplain Father Brendan Rolling and President Stephen D. Minnis unveiled a portrait that will be displayed in the St. John Paul II Student Center. Following are President Minnis’ remarks on the occasion.

Thank you Fr. Brendan for providing that beautiful opening prayer.

This is a great day at Benedictine College.

The unveiling of the portrait of St. John Paul II in the student center named for him on the eve of his first Feast Day as a Saint, is significant. This comes on the heels of the college naming and dedicating this very building to St. John Paul II on the day of his canonization — April 27, 2014.

St. John Paul II’s impact on this college — and on me personally — goes back to the very beginning of his pontificate.

St. John Paul II became Pope the year I was a freshman at Benedictine, and his reign as Pope ended during my first year back as President.

A group of students from Benedictine College decided to see him there. The trip took three and a half hours, the bus commandeered by Fr. Matthew Habinger and Fr. Denis Meade almost ran out of gas on the way home, and Benedictine College students were part of the almost million people on a farm in Iowa to see this new Pope. Fortunately, I was one of those students.

Seeing this towering man of virtue and courage so close to home made a huge impact on me. In fact, when I became president of Benedictine College I was inspired to repeat his message of “Be not Afraid” in my inauguration speech laying out plans for the college.

About 11 years after I saw him in Iowa, in 1990, Benedictine College’s enrollment was at its lowest point ever. That was the year that Pope John Paul II promulgated Ex Corde Ecclesiae (From the Heart of the Church), his transformative Apostolic Constitution governing Catholic colleges and universities. The powerful ideas in that beautiful document helped many universities strengthen the core reasons for their success. It was a new blueprint on how a Catholic college should be run — emphasizing being faithfully Catholic and academically excellent. And it was a blueprint Benedictine College decided to follow and still follows today. When Ex Corde Ecclesiae was promulgated, we had 570 students. This year we welcomed over 1800.

Then, in 1993, Pope John Paul II held World Youth Day in Denver. This visit was pivotal to many vocations in the Church.

A Future Chaplain and a Future Abbot

Paul Rolling and his friends made a road trip there. He says the experience of seeing the Holy Father gave him joy in his heart and tears in his eyes, and he says John Paul II is the reason he became a priest — now our own Fr. Brendan Rolling.

We are glad he did, because Father Brendan implemented John Paul’s theology of the body in our student life policies, and built one of the best college ministry programs in the United States.

There was another Raven who went to World Youth Day in Denver: Jim Albers. We know him now as Abbot James Albers, the abbot who consecrated Benedictine College to the Blessed Virgin Mary, in imitation of John Paul’s motto, Totus Tuus (All Yours).

John Paul’s energy and enthusiasm has driven so much at Benedictine College.

The college’s landmark document Benedictine 2020: A Vision for Greatness defines its academic goals by quoting John Paul: “As a Catholic college, we consider faith and reason as ‘two wings on which the human spirit rises to the contemplation of the truth.’ [John Paul II, Fides et Ratio]”

Built in the year 1996, the building was built during the pontificate of John Paul and represented a turning point for the college.

This building captures the spirit of John Paul II in its very variety: It is a place that embraces his love of sports, his love of art, his passion for the theater, and his embrace of student life.

It is also a great opportunity for us to honor one of the great leaders of our time. St. John Paul II had a huge impact on our world.

So it is very appropriate that a building be named after St. John Paul II at Benedictine College, the Flagship College of the New Evangelization.

Description of the Portrait 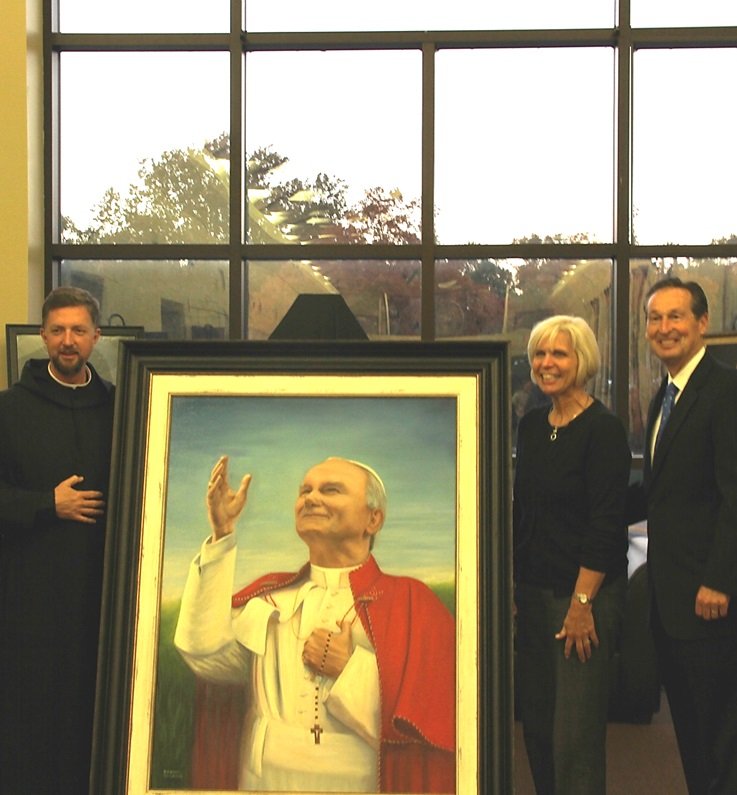 We were excited to dedicate this building in that Saint’s name and now equally excited to unveil a portrait of St. John Paul II to hang in the stairway of this building. We have asked Fr. Brendan Rolling, David Trotter, Dr. Linda Henry, Vice-President of Student Life and Dr. Joe Wurtz, Dean of Students to do the honors.

Will you now unveil the portrait.

This portrait of St. John Paul II was painted by Dawna Gardner from Maine. She is the same painter that painted the portrait of Blessed Teresa of Calcutta that hangs in the Mother Teresa Center for Nursing and Health Education and was unveiled on her 100th Birthday in 2010.

A picture of John Paul II was used as the model for this painting by Dawna Gardner, chosen by the college. It is significant for a couple of reasons.

First, the original photograph did not have him holding a Rosary, but his love of Our Lady and the commitment this college has to the Rosary and to the Blessed Virgin Mary inspired us to ask her to add it.

The second inspiration was from the homily by Fr. Brendan on the day of the naming of this building—the day of the canonization of St. John Paul II.

During that homily, Fr. Brendan told the story of the day, in 1981, Pope John Paul II was shot in an attempted assassination. As the Pope began to fall, he looked up to the sky and saw an image of our Lady, the woman to whom he had dedicated his papacy. Even though the gunshot wounds would be very dangerous, the Pope said that he knew because of the image of His Mother, that he would survive.

It was that story inspired by Fr. Brendan’s homily that caused this portrait to be painted in this manner. This painting will hang in the stairway leading from the second floor to the first floor of this building. And because of its placement, the portrait of St. John Paul II, will have his hand raised and his eyes looking in the direction of the statue of Our Lady of Lourdes in the Grotto—forever having the image of His Mother before him.

This is a significant and meaningful piece of art for this building and for the campus.